Imran Khan's 11 Points, been there done that - Insaf Blog by Sajeer Alam

Imran Khan's 11 Points, been there done that - Insaf Blog by Sajeer Alam 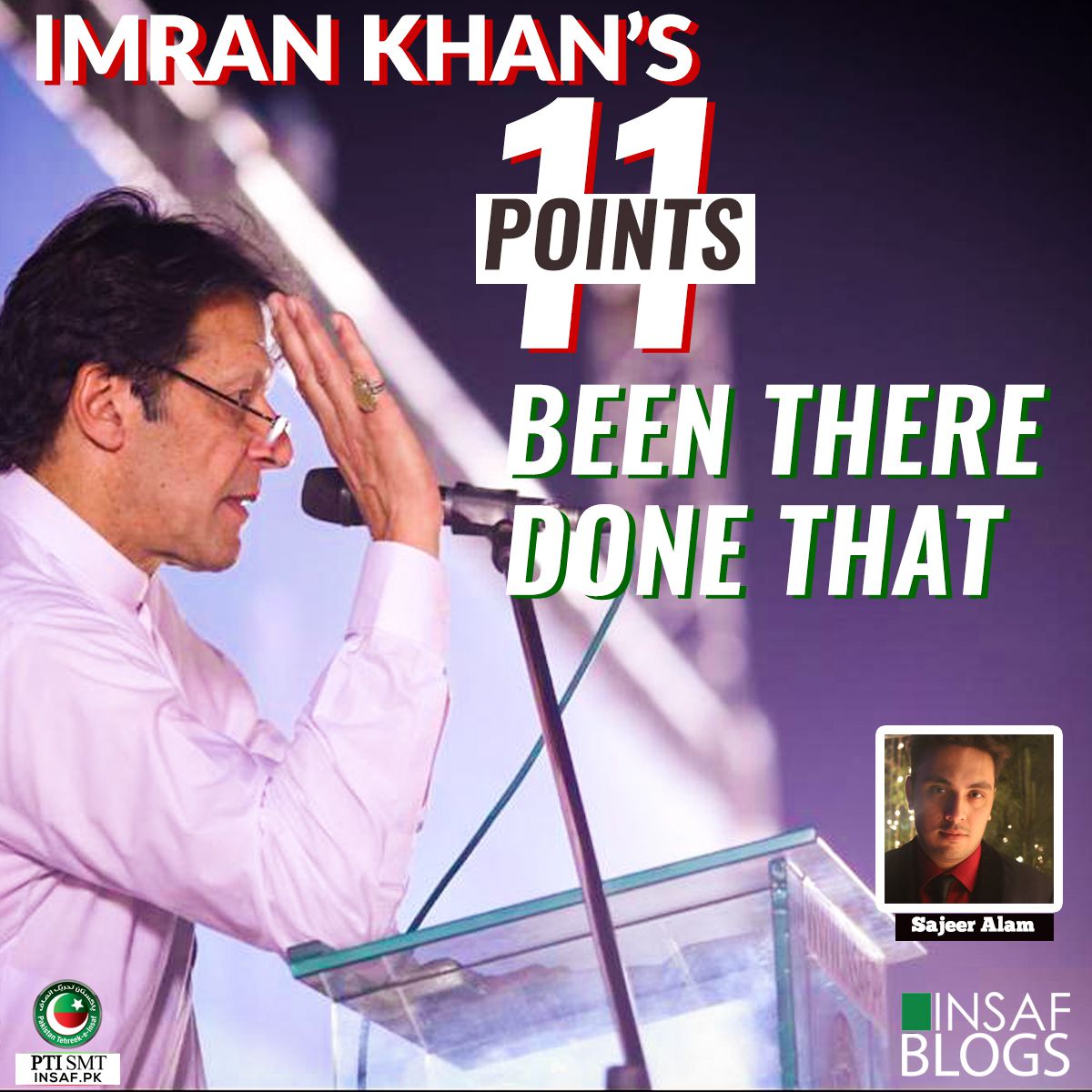 After witnessing the Jalsa on 29th April being a KP resident, I started to wonder if Imran Khan would be able to fulfill the 11 point agenda when he becomes Prime Minister of Pakistan.  I started comparing developments & changes that had taken place in my province. Here is what Imran Khan has achieved in Khyber Pakhtunkhwa‬:

The budget has been increased to over 120 Billion rupees;
40 thousand new teachers have been recruited, old schools have been  revamped and with facilities provided, new schools have been constructed while most are under-construction. Teachers absenteeism eradicated,
students migrated from private to Government schools, 5800 schools solarised and over 2000 more being solarised in South KP.

Over 170 militancy-hit schools reopened in Malakand, free WIFI in Government colleges, only Female teachers in Primary schools, Quran study made compulsory for kids, free textbooks provided, IMU established, free Education for students of age 5-16 and many more initiatives have been launched.

"Sehat ka Insaf" programme was launched for over 60% population in the province, over 6000 new doctors recruited, salary for doctors serving in the far flung districts has been  increased to two-folds.

ICUs and Emergency wards in major hospitals have been revamped & upgraded where state of the art facilities are provided for a common man. All previous Governments long pending projects have been completed, BHUs and RHUs upgraded and staff provided.

This is not entirely a Provincial subject but still the revenue of KP Government has increased over the past few years.

There is zero tolerance towards corruption. All officials/elected representatives including MPAs have not been spared, they are either asked to leave or resign. Jobs are not openly sold like it used to be in past, thousands of Patwaris & Police officials have been terminated from service on corruption charges‬.

One-window service has been launched for investors in KP, new 26 Economic Zones are being established, multiple food/clothes chains have opened outlets in KP due to improvedbsecurity situation. A United Kingdom based company has established Cement industry in KP

Over 500,000 green jobs created due to Billion Tree Tsunami, Tourism increased by over 70% in KP leading to increase in employment, thousands of doctors and teachers recruited, thousands of jobs given on merit base in the lower grades since PTI established it's provincial government.

Free Seeds have been given by KP Government to farmers.

PTI and KP Government has always supported KP-FATA merger, KP Government is ready to give seats to FATA representatives in KP Assembly.

Over 1 Billion and 16 crore trees planted, 40 Chaanga Maanga alike Forests created, 500,000 green jobs created, over 13000 plant nurseries established. There has been a 6.3% increase in the land covered by forests in KP recorded, this entire project is monitored by WWF and endorsed by WEF, IUCN, and International Media houses.

Major portion of new Educational institutes are for Women, also  women Desks have been established at Police Stations. Women are serving as Elite Commandos and in Bomb Disposal Unit in KP Police, Nurseries established for women under BTTAP, Female teachers recruited for Primary Schools.

Based on all these accomplishments which I have been a witness to in a difficult province like KP;
I feel Imran Khan certainly has the right know-how & capacity to deliver as the Prime Minister of Pakistan since he has “been there, done that” in KP.