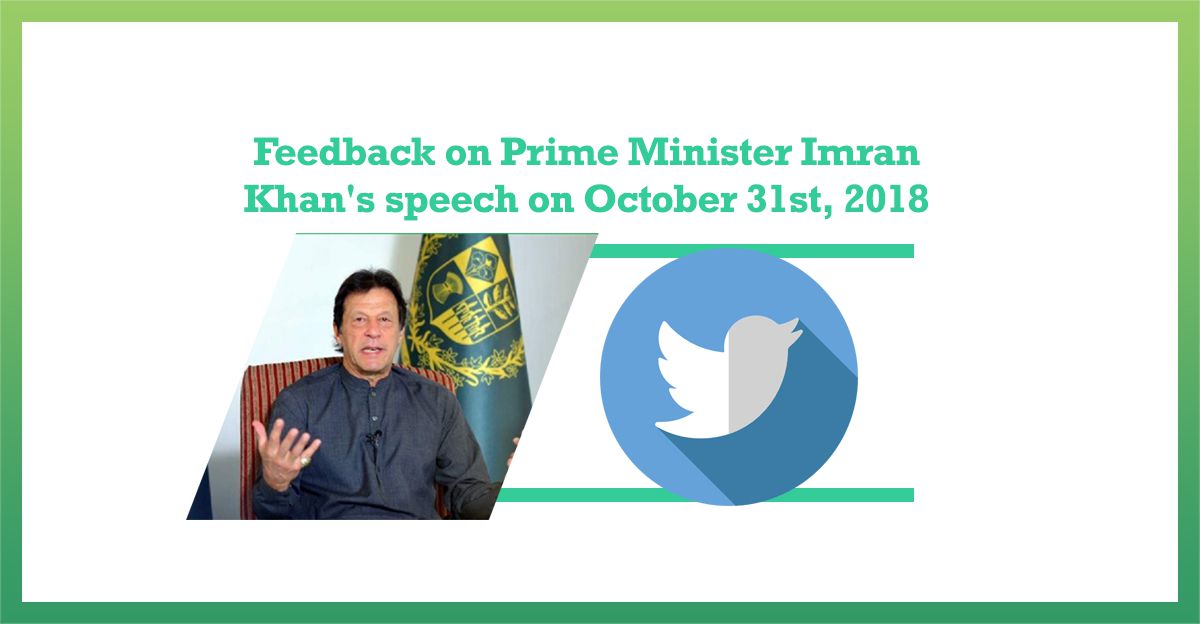 This #PMIKAddress was what Jinnah envisaged for Pakistan. It took us seventy years to reconcile with his vision and @ImranKhanPTI said it categorically

No nonsense, No negotiations.
Back off or State will excercise powers available under the law.
Well done Mr. Prime Minister. #PMIKAddress

Indeed #PMIKAddress was an address of a statesman communicating to its ppl heart to heart. #ImranKhanPrimeMinister didn’t mince words, spoke with clarity & vociferously. He has imparted strong message that Pak is not a leaderless state as he appeared himself in crisis as a leader

Well done Prime Minister @ImranKhanPTI. In the midst of this clamour and violence country needs a strong leadership which exhibits clarity and would not allow Writ of State to be challenged. We shoudnt concede space to bigots and those violating laws must pay for their crimes

Short. Bold. To the point speech by PM

first leadership of the country to have addressed this issue head on, unapologetically, with clarity & without mincing words on the consequences. Tough times ahead. @ImranKhanPTI #Pakistan #AsiaBibi #DawnNews #blasphemy

A bold,logical and beautiful speech by the prime minister Imran Khan on important issue after Supreme Court judgement on Asia bb. Its good to see PM come forward to take the bull by horns. PM raised valid&relevant points. I hope everyone will support prime minister on this issue.

What an excellent and to the point speech by PM Imran Khan.... clear message to all those bigots who want to destablise Pakistan for their own gains...

Khan Sb you nailed it!!! You’re not just a politician but a leader with guts to stand against these goons. #PMIKAddress

PM’s bitterest critics aka ‘liberals’ :- swallow your pride & take it on the chin. Realise now, #IK / PK PM has always has put nations interest before all. That ‘all’ includes those menacing ‘mullahs’ & that nation includes you. Rest easy.#PrimeMinisterImranKhan #PMIKAddress

Wildly impressed with @ImranKhanPTI's speech.
This is far better than what I expected. Gold star.

This is a remarkable speech in its clarity and boldness. Thank you PM Khan.

May Allah continue to guide and strengthen Pakistan’s leaders with this kind of clear headed courage and sense of purpose. https://t.co/hSPkpyCFhW

For the first time in my life, my country has a leader! @ImranKhanPTI may you set this nation right, we’re with you! #pakistan

Mr. Prime Minister, what an address! For the time in my life, I felt like my Prime Minister was talking to me directly. @ImranKhanPTI

What a brilliant speech by @ImranKhanPTI - brave and poised. Immensely impressed. He is proving himself to be the leader he always said he would be. Bravo PM Bravo!!!

Super impressed with @ImranKhanPTI’s address to the nation. To the point, making it clear that the government won’t be bullied by any fanatic.

Very brave of you Sir @ImranKhanPTI!

Imran Khan's speech to the nation, which has delivered a strong and defiant rebuke to religious hardliners, suggests that the state may finally be changing course in terms of how it deals with these dangerous and destabilizing elements. It's another century for IK. #Pakistan

Proud of Prime Minister @ImranKhanPTI for for his direct stand on Supreme Court judgement on #AsiaBibiCase . He denounces few people’s attack on honourable Judges and Chief of Army Staff. Sanity must prevail pic.twitter.com/OObAnuHVL1

PM @ImranKhanPTI you have won our hearts today... We can say for this brave act ‘TUSI GREAT HO’

Mr PM you made us proud.

Commendable courageous msg by PM @ImranKhanPTI making it clear that State will ensure peace and it won't be held hostage by goons.

Thank you @ImranKhanPTI for taking bold, truthful and clear stance of SC verdict #AsiaBibi
Nothing is done against Islam’s teaching and spirit in SC today’s verdict. says Prime Minister @ImranKhanPTI

Thank you @ImranKhanPTI for speaking up. #RuleOfLaw matters. https://t.co/syILTiAuDI

Prime Minister @ImranKhanPTI appeals to all factions of society to maintain peace, order and responsible behaviour that is true to the vision and principles of Riyasat e Madina. https://t.co/ahHR1NdR1c

Anyone who threatens to assassinate a public servant doing his or her duty will be dealt with the LAW. - Naya Pakistan PM @ImranKhanPTI

Well said @ImranKhanPTI a unifying message. It’s so important to stand up for #TheRuleOfLaw and to bring the country together #pakistan

Bravo @ImranKhanPTI exposing and taking the goons head-on who are trying to hold the entire state hostage, inciting violence against the judges and the army chief. This is how the writ of the state should be established, waiting to see these words reflected in govt’s actions.

A brilliant speech by Prime Minister @ImranKhanPTI , the PM who has the guts to address the nation and challenge religious fanaticism from a small group trying to force the courts and government to take decisions of their choice. Bravo!