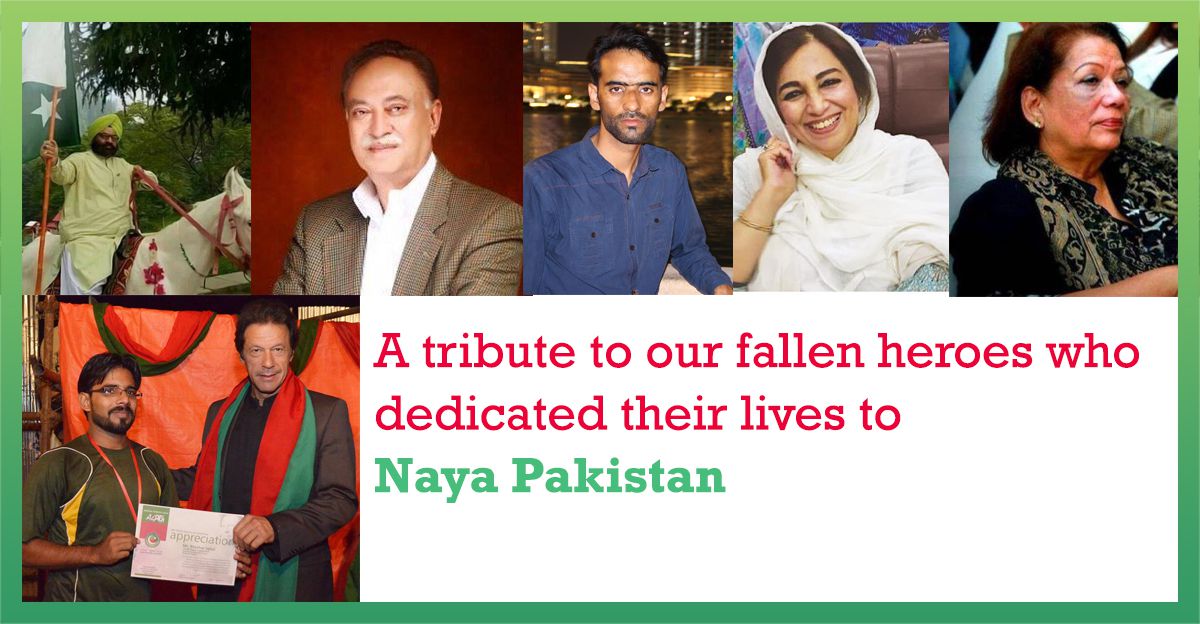 Yesterday was a historic day. A new dawn for Pakistan with a lot of hope and expectation. We finally rid this country of career politician's who have ruled by birthright. Khan Shb's oath has brought Pakistan's mojo back. However, this was possible with the help of leaders, volunteers, and supporters who are the silent warriors of this struggle.

Our heroes dedicated their lives to the cause of Naya Pakistan. Some of us are lucky to be seeing it with our own eyes. Others, left this world before they could see the fruits of their labor. We pay tribute to our fallen soldiers by recognizing them as a critical part of our struggle and announcing that they will always live in our hearts.

Dr. Soran Singh (died 22 April 2016) was a Pakistani Sikh doctor, TV anchor, politician and Minister of Minorities of Khyber Pakhtunkhwa. Before joining Pakistan Tehreek-e-Insaf in 2011, he was a member of Jamaat-e-Islami Pakistan for nine years. He was also member of Tehsil council, Pakistan Sikh Gurdwara Prabandhak Committee and Evacuee Trust Property Board. He also hosted the programme Za Hum Pakistani Yam for three and a half years with Khyber News.

Ahsan Rasheed was an engineer by profession and remained the chief of a Saudi company before joining the PTI. He was among the top leaders who were founding members of the PTI and a close aide of Imran Khan. He played a very active role in legal fraternity and political parties movement against the military rule of Pervez Musharraf and was arrested during the struggle.

Sajid Saleem Kayani belonged to Azad Kashmir. He led the AZK social media team and was also a critical part of the videos team. He later went on to lead the main teams running PTI Official and Imran Khan Official. He put several career initiaives on hold to dedciate his time for the cause of Naya Pakistan.

Syeda Saloni Bukhari was a founding member of the Pakistan Tehreek-i-Insaf (PTI). As a committed leader, she was entrusted with the role of the PTI central vice president as well as Punjab’s Women Wing president. Besides, she was member of the core and central executive committees.

Sadeeq Khan was born on Jul 1, 1956 in Taxila. He started his political career as a member of the District Council Rawalpindi as a peasant councillor in 1990. He made history in his constituency by securing 48,440 votes and beating his rival, PML-N’s Chaudhry Nisar Ali in the 2013 general elections.The late MPA was also serving as chairman of the Standing Committee on Environment Protection. He served as tehsil nazim for two consecutive terms during 2002-10.

Sardar Ikramullah Gandapur was a member of Pakistan Tehreek-e-Insaf. He served as provisional Minister for Agriculture in the Khyber Pakhtunkhwa Assembly. He was elected to his late brother's seat through a by-elections. Gandapur died from injuries sustained after the Kulachi suicide bombing in Dera Ismail Khan.

On 16 October 2013, he was killed by a suicide bomb blast on the first day of Eid al-Adha while greeting with locals at his residence in Kulachi village.

Malik Ghulam Abbas Khaki had joined the PTI soon after the 2013 general elections and devotedly worked for the party for the next five years and finally the party allotted him the party ticket from PP-222 Multan-XII. Khakhi was the most loving and popular person in the local politics.

Khakhi had been in the local electoral politics for the last 28 years and he had spent most of his time in Pakistan People’s Party. He had also contested in capacity of independent candidate in past general elections.

Zahra Shahid Hussain commonly known as Zara Apa, was a Pakistani activist-politician, teacher and the senior vice president of Imran Khan's Pakistan Tehreek-e-Insaf (PTI) in Sindh. She had formerly served as the president of women's wing of the party in Sindh, and was a member of the central executive committee of the party. On 18 May 2013, she was assassinated outside her house in the upscale Defence Housing Authority neighborhood in Karachi.

Mazhar Iqbal was one of the most patriotic and hard working people we knew. He covered countless PTI events all over Punjab and paid expenses from his own pocket most of the times despite being from a very humble background. His growth in skills and professionalism was exemplary. He felt for the cause with all his heart and gave it all at every event he covered. One of the fondest memories we have of Mazhar is him starting a camp outside his house during 2013 Elections Campaign for Imran Khan's NA-122, all funded from his personal savings account. He was a member of SMT Punjab Core Team and Head of Punjab's Photography Team.

Asad Bajwa was one of the rising stars of Sindh Social Media Team. He was covering ground events and was also involved with content writing.