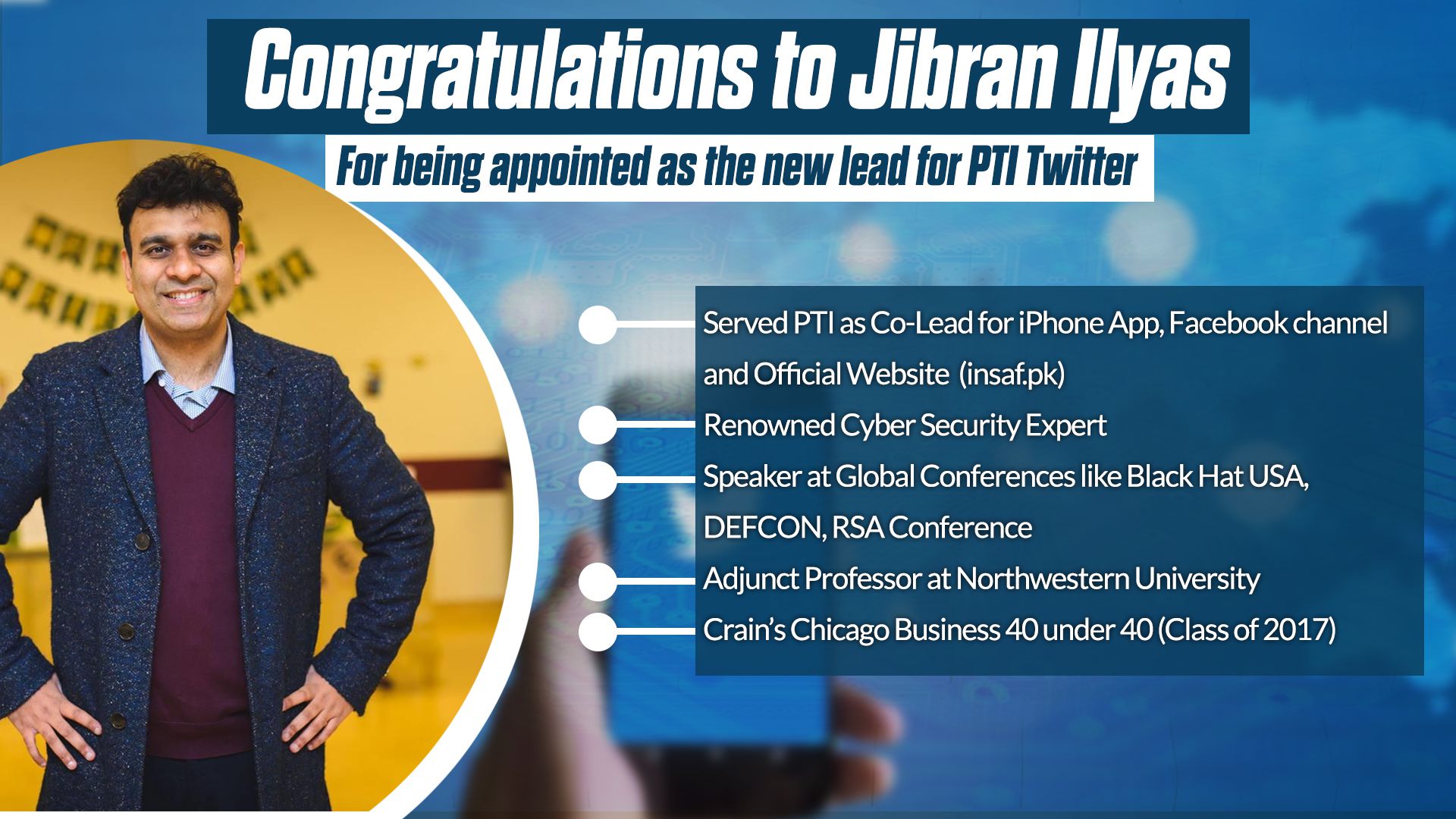 We are pleased to announce Jibran Ilyas as the new Twitter Lead for PTI. He has served the party as Website Lead, Facebook Lead and Co-lead for PTI iPhone Application in the past.

This is how he has been welcomed by the activists:

Congratulations Jibran and best of luck! Huge responsibility on your shoulders, I am sure with your passion and commitment you will take on the challenges and make the network stronger for Pakistan and @ImranKhanPTI

Thanks to @ahsanalavi for his tireless efforts in all these years.. Leading the team and investing so much time from Dharna to Panama Days to Elections till now pic.twitter.com/MvvKcMbXH3

Congratulations Jibran! Good to see a gentleman at the front!

Congratulations to @agentjay2009 on becoming the Twitter Lead of @PTIofficial, I must say that it was Jibran who gave me opportunity to join Facebook Team in very early days of my SMT, and he has supported and motivated me a lot, great to have you lead us on Twitter now#PTI

The full profile below:

Congratulations @agentjay2009 for new responsibility as Twitter Lead. You are a team player with creativity. I learned a lot from you and worked with you on Facebook, Insaf TV, Video Team, Graphic Team, Ground Team and more.@ahsanalavi Thanks for your remarkable services for PTI

This is great news. @agentjay2009 has the competence and the character to be a leader in this role. Congratulations ! https://t.co/auPhbQHhe1

MashawAllah MashawAllah... Good News for PTI & Bad News for PMLn
So glad to hear that @agentjay2009 is taking up another responsibility. Jibran Bhae has always been an inspiration for us.
Really miss those days of tehreek.
Congratulations and good luck for new role.#PTISMT

Jibran Ilyas serves as a Director of Incident Response for a leading Cyber Security Firm and is an Adjunct Professor at Northwestern University (USA) for a Digital Forensics course. At his day job, Jibran serves as an investigative lead for high profile data breaches. As a thought leader, Jibran has presented on the topics of computer forensics and cybercrime at several global security conferences including DEFCON, Black Hat USA, RSA Conference, Thotcon, Microsoft Digital Crimes Conference and SOURCE Barcelona. He was recently honored as Crain’s Chicago Business 40 under 40 for his contributions to the cyber security industry.

Jibran has been part of PTI Social Media Team since 2011 and has served as Central Facebook lead, iPhone App Co-Lead and Website lead. In 2011, Jibran was appointed Facebook admin for PTI Chicago page and from there he was promoted to PTI USA Facebook Admin in 2012. Also in year 2012, Jibran started working on PTI's Official iPhone Application with Co-leads Haris Siddiqui and Aly Boghani. The application was released on January 20, 2013 and became the first ever mobile application for a political party in Pakistan.

In year 2013, Jibran quit his job in Chicago and traveled to Lahore to become part of Election Campaign 2013 and worked in National Campaign office in Lahore from March 2013 to May 2013. He traveled on almost all Campaign Jalsas with a team of passionate volunteers and provided coverage on all Official Social Media channels. Post campaign (On June 10, 2013), he was promoted to PTI's Central Facebook page lead where he led central facebook pages including PTI’s official page and Chairman Imran Khan’s official page.

As the facebook lead, Jibran introduced several new features on facebook pages such as detailed testimonials from supporters and short User Feedback graphics to build a narrative and to promote the true feelings of the Pakistani people, in the context of the historical times we live in. Jibran managed a Global team of volunteers for PTI regional and overseas facebook pages and led the PTI's narrative on Facebook for the historical Dharna for 126 Days. Under Jibran's tenure of about one and a half years, PTI's Central Facebook page grew from 852,000 Likes to 2.46 Million Likes, while Imran Khan's Official Facebook page grew from 964,000 Likes to 3.29 Million Likes (all without any paid promotions). The secret of the success was the heartfelt captions him and his team created on all posts, and maintaining a high standard for the content according to PTI's Social Media Code of Conduct.

In 2018, Jibran served as one of the leads for PTI website revamp, which was officially launched at Minar e Pakistan PTI Jalsa in April. The site played a pivotal role in General Elections 2018 by propagating PTI’s message, selling PTI merchandise and facilitating online donations. It continues to provide single source of truth for all PTI developments.

Jibran has a bachelor's degree in Computer Science from DePaul University and a Master's degree in Information Technology Management from Northwestern University.