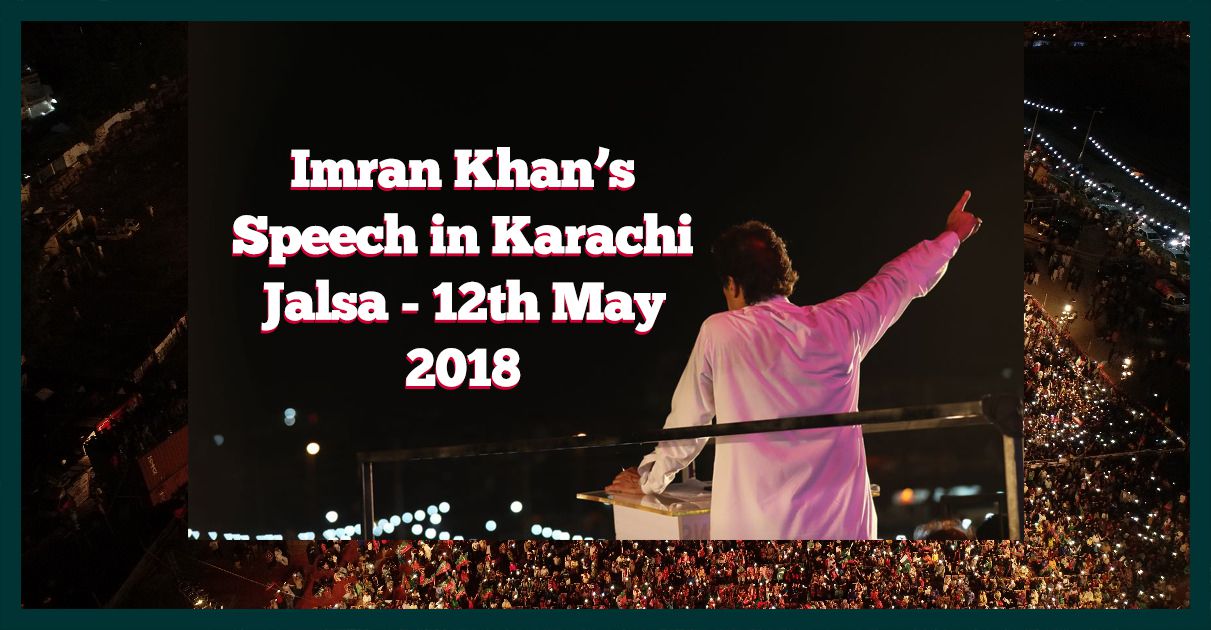 In the name of Allah the Beneficent the Merciful.
Him do we worship and from Him do we seek guidance.

Karachi!!! Thank you!  Thank you for this mind tumultuous welcome.

I want to present to you a 10 point plan to help restore Karachi to its actual glory in sha Allah.

Karachiites, you are the most aware people of the country and all political movements started from this very city.
Karachi is rightly called Mini Pakistan for the reason that it embraces people from all across Pakistan.
It is the financial hub that reflects the financial strength of the rest of the country.

I ask you to learn from me. Think great and strive to achieve it. When I entered the cricket field, there were better and more intelligent players than me but I am where I am because I dreamt big. I decided to become a Test Cricketer and I worked towards it without doubting myself or letting anything or anyone shaking my resolve. When I performed poorly in my first match, I was removed from the team but it did not deter me. I came back after 4 years to succeed and then as an international cricketer after 5 more years. I strove towards my dream. I dreamt of Shaukat Khanum Hospital, NAMAL University and PTI and never got demotivated by any negativity. Stay strong in your dreams.

Pakistan is the dream of a great philosopher Allama Iqbal which the greatest politician ever, Muhammad Ali Jinnah materialized.
You are as successful as you can possibly dream to be. Dream of a great nation which people respect. Where your passport has high esteem. It's not impossible. Like at the time of Ayub Khan.
When I used to tour the world, as a Pakistani I never required a visa.  Compare it to today where the Prime Minister of the country was strip-searched. What respect would then the ordinary citizens be awarded ?

I dream of making Pakistan a welfare state. We need to get over racial and provincial discrimination. This has just been created to spread discord and disunity. Rise above it.

Karachi was the city of lights where Arabs used to travel to on vacation.  Where there was security at any time of the night.

One politician from Karachi claimed to stand for the benefit of Karachi but has been abroad for over 20 years. The other rulers of Sindh have palaces and free flow of funds while the people of Sindh are impoverished miserably.

Decisions need to be made for the benefit of the nation, not that of a few. The way the western world protects the rights of their animals puts to shame the rights of human beings in Pakistan. Living next to drains. Spilling garbage. People cannot be numb to the plight of others just because they themselves are comfortable.

In China, in 30 years 70 crore people were rescued from an impoverished state and now it is one of the most powerful countries in the world. Process takes place not in isolated groups of people but with masses.

The way the welfare state was, at the time of the Prophet Peace be upon him, the Medinite state is what we need to achieve. Which because of alleviating the poverty from society became the strongest and longest ruling superpower to rule the world.

We have to work on eliminating corruption.
In the last 4 years, 420 ministers and 12 lac government servants in China have been caught for corruption. It is a falsity that correcting corruption weakens a state.
Look at Singapore , Malaysia and Mahathir Muhammad.
Mahathir Muhammad himself when i met him told me that the secret to a strong nation was eliminating corruption. Look at him now. He's back in power at the age of 90 years
.
NAB is being attacked in Pakistan when it attempts to deseed corruption by the corrupt themselves.
Nawaz Sharif and Zardari both are attacking NAB and Nawaz Sharif threatens to file a suit against NAB for exposing his corruption. NAB has filed a case against me in some helicopter case but I welcome that.
In fact, we welcome them to identify the corrupt elements in Khyber Pakhtunkhwa so we can remove them as we just removed 22 ministers.

Civil services help build a nation. Corrupt people in it , quelling meritocracies like Nawaz and Zardari have done destroys Institutions.

Pakistani Rs. 8 billion have been siphoned off to the UAE. From a nation that is heavily indebted!
It could have been well spent on our children's education.

Presenting to you the 10 points for Karachi.

The biggest revenue generating city has no access to clean water. We will change the administrative system and get people to vote directly for the mayor.
Am experienced, empowered person with authority to bring change.
The 18th amendment dissolved powers from Federal to Provincial level but that's where it stopped. We will need to empower the mayor. This is the reason why I have also decided to contest election from Karachi. So we can make beneficial changes here like we have in Khyber Pakhtunkhwa.

We want better government schools because that's where the less rich families send their children. We also plan international standard universities in the city where quality education can be imparted to all stratas of society.

The Chief Justice of Pakistan visited Khyber Pakhtunkhwa and I welcome that. We have worked to bring change in hospitals so they can match the standard of internationally accredited hospitals like SKMCH. We are trying to Implement policies so government hospitals can compete with private hospitals.
In Karachi we  plan to do the same. So that like Khyber Pakhtunkhwa, patients move from private to public care.

The highly corrupt Sindh police that is involved more in extrajudicial killings than protecting the people was lauded by Asif Ali Zardari.
In Sindh Police, there are policemen like Rao Anwaar, the murderer of 440 people in extrajudicial killings. In Punjsb police, 870 people were admitted to be killed by Abid Boxer. The latter said we can't kill anyone without command of the Chief Minister. So who ordered Rao, baby Bilawal I want to ask you?
Not that you have any idea of Pakistan, but can you just go and find out how many extrajudicial killings have taken place in Khyber Pakhtunkhwa or fake cases have been against political opponents? NONE!!!
There are 2 cases of terrorism filed against me in Punjab for political victimization. The Khyber Pakhtunkhwa is free of such flaws. Recruitment takes place through a National Testing System. No one can intervene in the recruitment or transfer of any individual. Not even the Chief Minister.
We will transform the Sindh police for your betterment so you do not need Rangers. In Sindh Police, Faryal Talpur the sister of Asif Ali Zardari,  according to IG Sindh A.D. Khwaja, recruits people after taking bribes. Promotions are given based on the amount of money a police officer can offer.
So who will they extort from what they have spent? You!

Reducing cost of businesses is crucial to the financial revival of Karachi. Asad Umar is our shadow finance minister and he's already conducting meetings with businessmen to devise a workable solution for this purpose.

6.Provision of cheap and sustainable electricity.

Currently the cost of electricity production and distribution to customers is really high while power generation is extremely low. We will try out best to address that.

With 70 % of Karachi's population under 30 it is unbelievable that there are hardly any recreational facilities.
We will improve those and provide playing grounds so Karachi can get back to producing sports stars like Javed Miandad and Mohsin Khan.

Pakistan is 7th in the world's most adversely affected countries from environmental pollution. We will work on afforestation like the revolutionary Billion Tree Tsunami campaign in Khyber Pakhtunkhwa. Dr. Arif Alvi is already working on it under the Million Tree Tsunami in Karachi. Infact, we need to exert emergency measures for the implementation of our successful Billion Tree Tsunami model all over Pakistan.

Unfortunately Karachi doesn't even possess a proper sewage system. We will work on fixing that with administrative policies as well.

If any city is in need of the Orange Train Plan, its Karachi, given it's population and the lack of a proper mass transit system. It is a must for the multitude of people and to reduce pollution.

It is painful that the youth do not have jobs even in this highly industrialized city. People commit suicides and get involved in criminal activities when they are without work.
We will work on generation of employment facilities.

These are the 10 points that we hope to Implement for you once we are in power.

Though I had decided not to mention the unworthy Nawaz Sharif but what he has said lately must be commented on as it is an attack on Pakistan.

Nawaz Sharif has now come out and claimed Pakistan was involved in the condemnable Mumbai attacks. Entire Pakistan condemned those attacks on innocent lives.
I ask him, if this is what had happened, did your conscience not awaken when you were in power? It's much like Bilawal Zardari demanding justice for Benazir Bhutto' s brutal murder despite his father, Zardari being the President for 5 years after that.

These 2 are the MirJaffar and Mir Sadaq of Pakistan's politics. They can stoop to any level to safeguard their ill gotten wealth.

This is part of an international conspiracy to malign and pressurize the Pakistan army for their own vested interests. I criticized the army being sent in to fight it's own people, the drone attacks and they called me Taliban Khan. You can't blame the army because it follows state orders. To blame are those who sent them to fight their own people.

Nawaz Sharif in 2 years couldn't answer 2 simple questions regarding the source of his wealth. He has attacked all state Institutions but failed to provide any proof.
Shameful these 2 people are!

Allah is Al Haqq and the truth shall always prevail, that's His promise.
I am happy that Nawaz Sharif stands exposed for chanting the Narendra Modi mantra. The people of Karachi always understood that. I pray the people in Punjab do so as well.

So do not forget my people, we shall make Pakistan such a nation that rather than taking debts, it will grant loans to the poor, even in India.