Prime Minister Imran Khan in U.S to attend the UNGA Session - All Activities 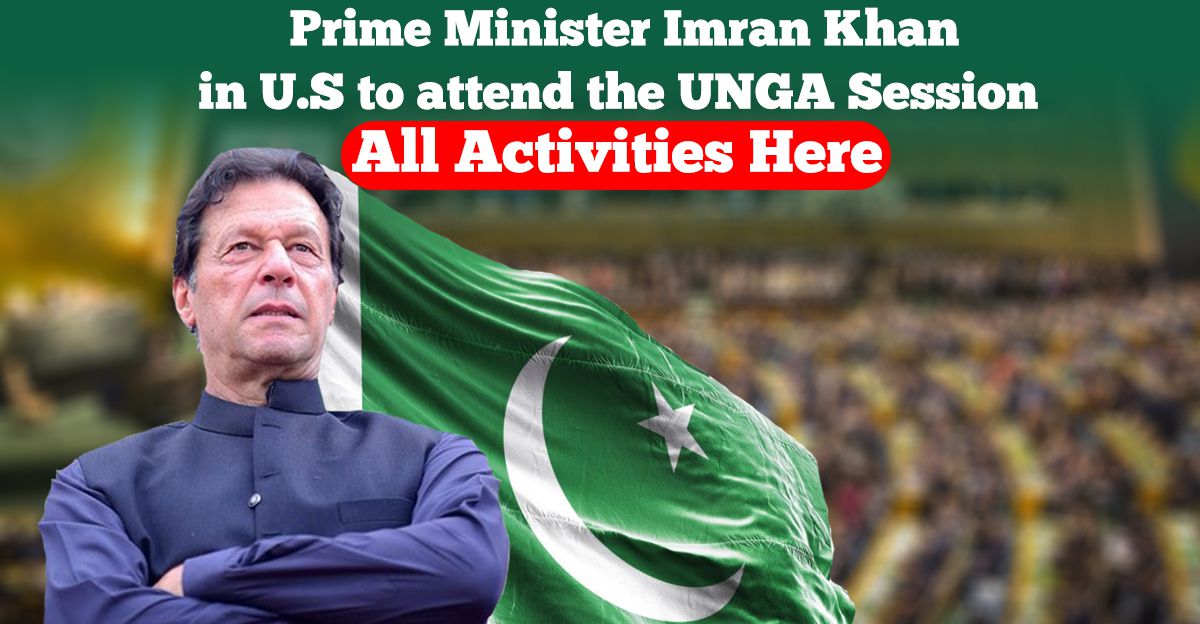 I believe that we can only try our best: the rest you leave to the Almighty. Do they think that the people of Kashmir will accept the status quo when the curfew lifts?

Proud moment for #Pakistan under the charismatic leadership of Prime Minister Imran Khan :: He has emerged on global arena as key player for World Peace and Human Rights, and effectively raising voice for suppressed Kashmiris on international forums. Imran Khan is not just an ambassador of Kashmir, but he’s proving to be a global muslim leader and ambassador, showing the true version of One Islam, of which the West holds a different opinion. Even if you have not voted for Imran Khan, today your heart will be accepting the fact that he has fought for Kashmiris, he has fought for Pakistan and most importantly he has fought for entire Muslim Ummah !

Prime Minister Imran Khan has turned around the game for Pakistan. He has earned Pak massive respective &also has put the case of Kashmir internationally. At the 2019 UNGA, his charisma&statesmanship skills attracted state meetings, friendships&advocacy on Kashmir issue.

Prime Minister of Pakistan Imran Khan Speech at High-Level Side Event of the 74th Session of UN General Assembly, Environmental Stewardship in Addressing Poverty to Achieve Sustainable Development for All in New York, USA (26.09.19)

Prime Minister of Pakistan Imran Khan Speaking on peace and stability in South Asia, and the current situation in Jammu and Kashmir at Asia Society, New York, USA (26.09.19) 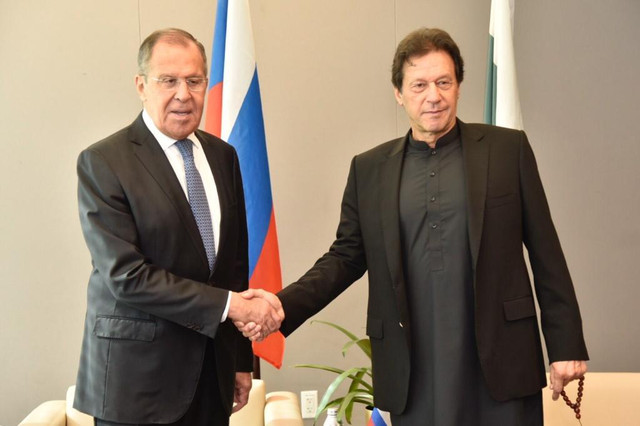 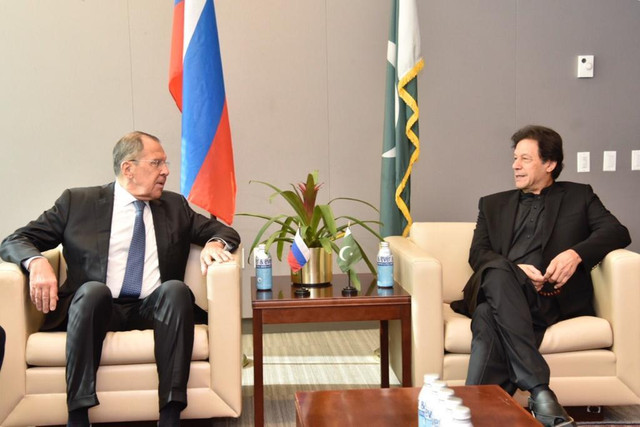 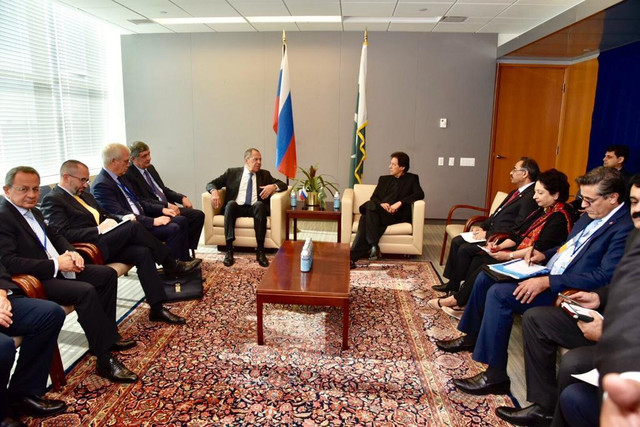 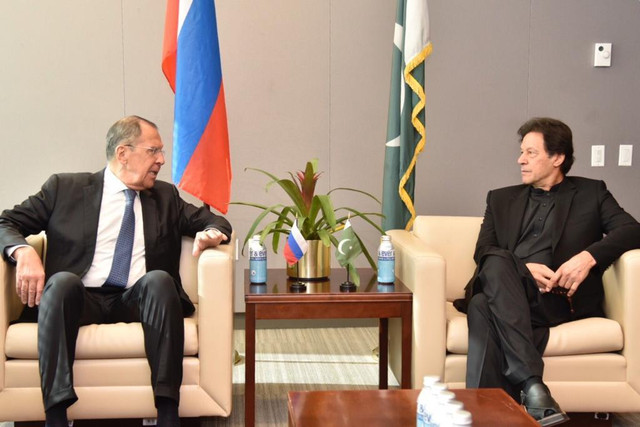 Pakistan and the Bill & Melinda Gates Foundation Unveil Collaboration on Ehsaas Program to Alleviate Poverty Pakistan and the Bill & Melinda Gates Foundation today signed a Memorandum of Understanding in support of the Ehsaas initiative to alleviate poverty in Pakistan. Prime Minister Imran Khan, Dr. Sania Nishtar, Special Assistant to the Prime Minister of Pakistan on Poverty Alleviation and Social Protection, Bill Gates, co-chair of the Bill & Melinda Gates Foundation, and Chris Elias, president of global development, Bill & Melinda Gates Foundation, participated in a bilateral meeting on the future of Ehsaas, a collaboration to put funding, technical assistance, and the help of global experts toward improving health, nutrition and financial inclusion within Pakistan. Ehsaas aims to provide effective safety nets through 134 new poverty-focused policy actions and programs. PM Khan said this is “the biggest anti-poverty project ever launched in the country and it has been planned with a great deal of attention to detail. I’m pleased that the Bill & Melinda Gates Foundation will assist with a range of activities including accelerating stunting reduction programs, supporting financial inclusion initiatives and investing in public health systems to improve health and reduce maternal, newborn and child mortality.” Since he came to office in 2018, Prime Minister Imran Khan has set out an ambitious plan to alleviate poverty and improve health and education for the most vulnerable people. The focus of these efforts is in Ehsaas, a new multi-sectoral initiative established by the federal government. The initiative aims to radically improve Pakistan’s progress toward achieving the UN Sustainable Development Global Goals (Global Goals) for its more than 210 million people. During the meeting PM Khan expressed full commitment to put measures in place to end polio once and for all, as well as make progress on the micro-payment gateway and financial inclusion. The ‘One Woman One Bank Account’ programme, which comes under Ehsaas, was also discussed in relation to how it can accelerate both financial inclusion and women’s empowerment. This new collaboration continues the foundation’s more than decade-long work in Pakistan. Programs have covered a range of shared development priorities, including polio eradication, financial inclusion, routine immunization and maternal, neo-natal and child health. Throughout that time, polio – a disease that stands on the brink of eradication across the world – has remained the top priority. The foundation plans to spend about $200 million in Pakistan in 2020. About Ehsaas Ehsaas is about the creation of a ‘welfare state’ by countering elite capture and leveraging 21st century tools—such as using data and technology to create precision safety nets; promoting financial inclusion and access to digital services; supporting the economic empowerment of women; focusing on the central role of human capital formation for poverty eradication, economic growth and sustainable development; and overcoming financial barriers to accessing health and post-secondary education.

Prime Minister Imran Khan met the Editorial Board of the Wall Street Journal (25.09.19)

The two leaders discussed a wide range of bilateral, regional and multilateral issues of mutual interest.

Prime Minister Imran Khan briefed the Norwegian Prime Minister on the current situation in the Indian occupied Jammu and Kashmir entailing grave risks for peace and security. The Prime Minister also highlighted belligerent statements by Indian political and military figure as well as their allegations of “terrorists” seeking to cross over and stressed that these were meant to stage some false flag operation and further escalate the tensions.

The Prime Minister underscored the need for urgent steps by the international community to help alleviate the sufferings of the Kashmiri people subjected to inhuman lockdown for 7 weeks. He stressed that it was equally important to ward off threats to peace and security and to facilitate a peaceful resolution of the Kashmir dispute.

In the regional context, the two leaders exchanged views on the Afghanistan issue and underscored the importance of a successful conclusion of the peace and reconciliation process.

The two Prime Ministers also agreed that a vibrant Pakistani diaspora in Norway was a source of strength for the bilateral relationship.

Prime Minister Imran Khan met with Editorial Board of the New York Times (25.09.19)

Pakistan and Turkey are co-hosting the roundtable discussion. President Erdogan is also present. Prime Minister Imran Khan calls for effective measures to counter hate speech and Islamophobia. Noting the growing incidence of discrimination and violence based on religion and belief, the Prime Minister underscored the importance of addressing both the drivers and consequences of these phenomena. He cautioned against attempts to denigrate revered personalities and scriptures cloaked in the right to freedom of expression and opinion. Marginalisation of any community leads to radicalisation Religion has nothing to do with terrorism. There is a need for promoting greater understanding and tolerance among and between communities across the world. United Nations provides an important platform to evolve an informed discourse on countering Hate Speech World must understand Muslim’s sensitivities for Islam and the reverence for Prophet Muhammad PBUH Prime Minister Imran Khan participating in the High-level Roundtable discussion on "Countering Hate Speech". (25.09.19) 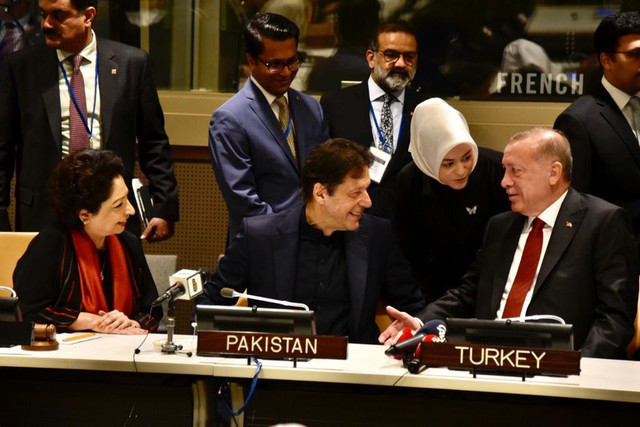 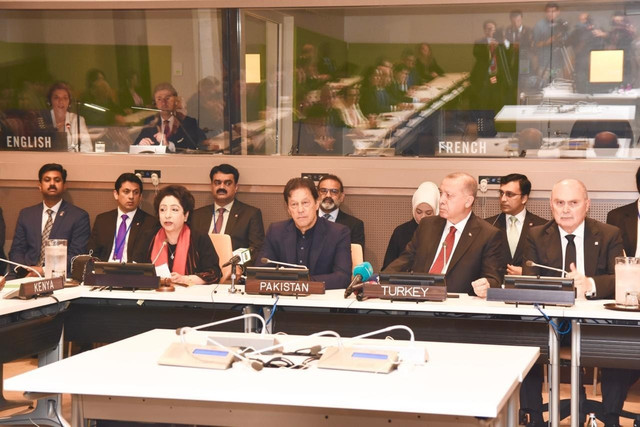 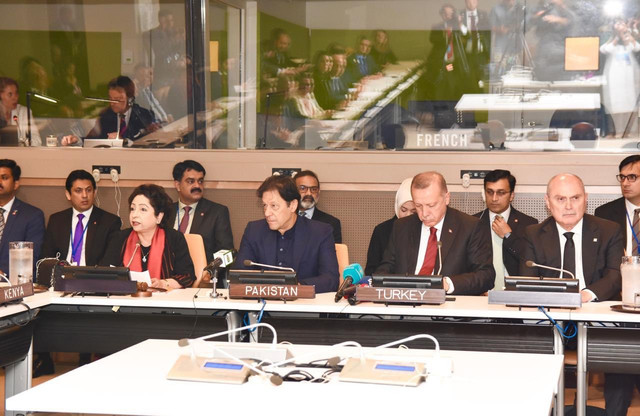 Prime Minister Imran Khan hosts dinner in honor of Heads of Delegation of OIC Contact Group on Jammu & Kashmir at New York on the sidelines of 74th UNGA Session. (24.09.19) 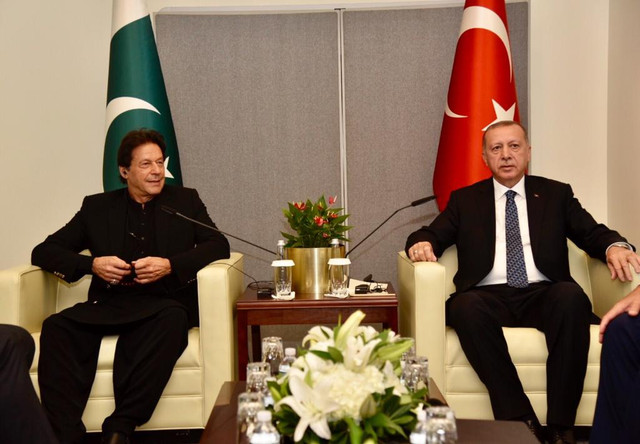 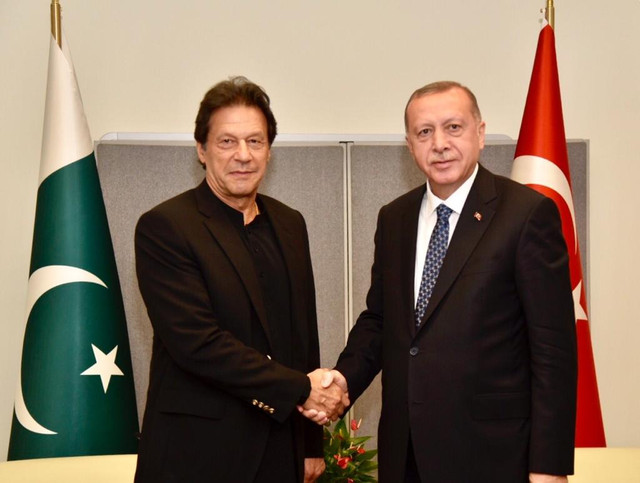 Prime Minister of Pakistan Imran Khan during media talk before a bilateral meeting with US President Donald Trump in New York USA (23.09.19) 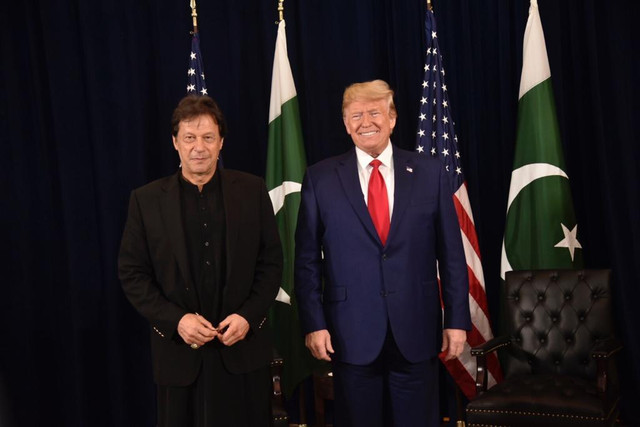 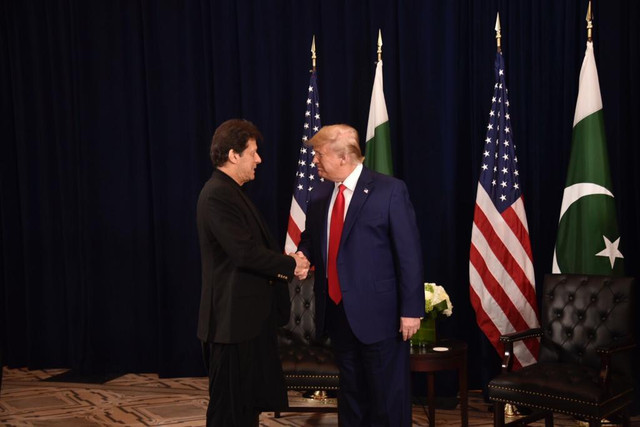 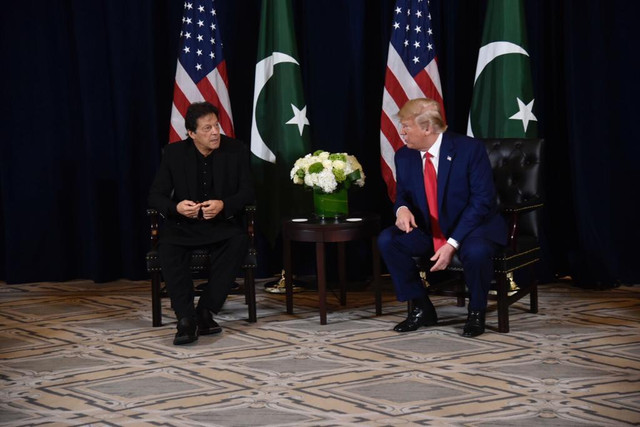 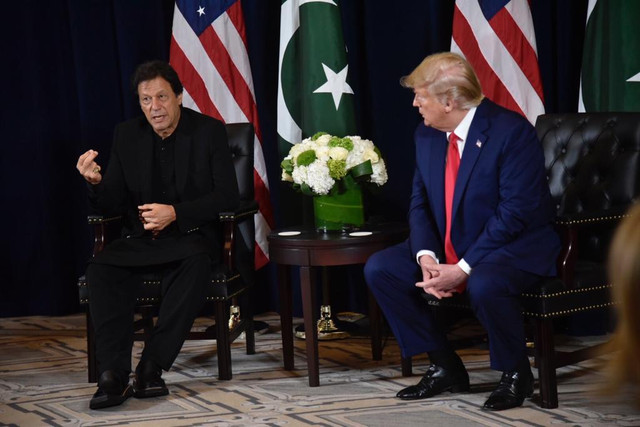 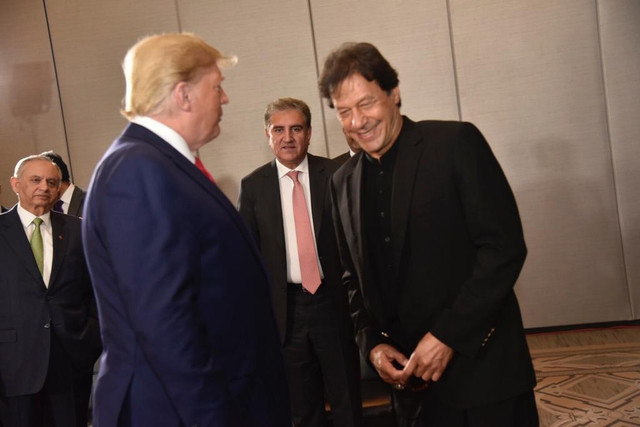 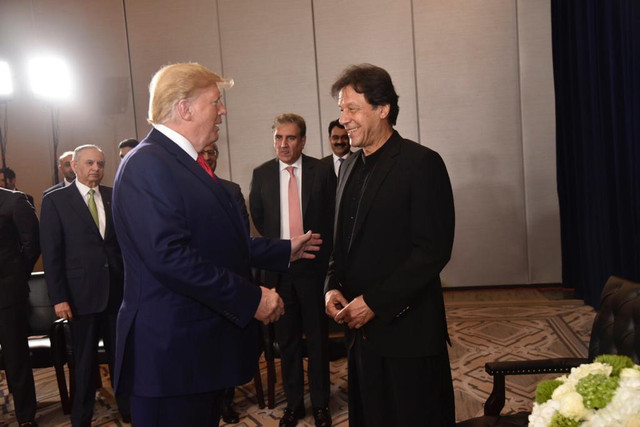 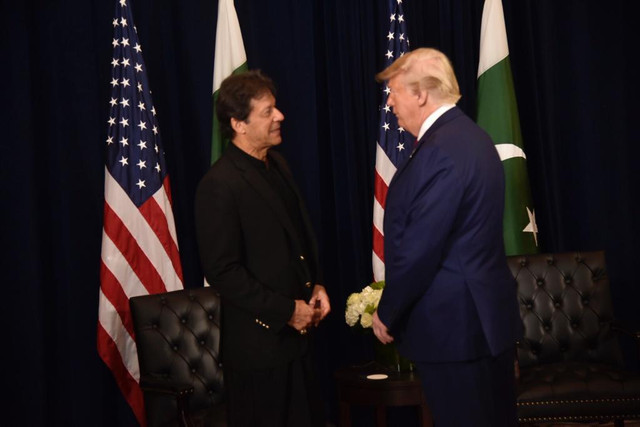 Prime Minister Khan is in New York for participation in the 74th session of the UN General Assembly. Senator Graham chairs the Senate Judiciary Committee and is a member of the Senate Foreign Relations Committee. The Prime Minister and Senator Graham discussed bilateral relations and the regional situation. The Prime Minister appreciated Senator Graham’s support for strengthening Pakistan-U.S relations. Prime Minister Khan expressed his grave concern over the deteriorating situation in Indian Occupied Jammu and Kashmir. He said India’s lockdown in Kashmir had created a humanitarian crisis and posed a threat for regional stability. He said the United States could play a positive role in resolving the Kashmir dispute, which was the main obstacle to lasting peace in South Asia. The Prime Minister said Pakistan desired peace in Afghanistan and remained fully committed to working with the United States in achieving a political settlement in Afghanistan. He hoped for an early resumption of the Afghan peace process. Senator Graham said a strong, strategic partnership between Pakistan and the United States was mutually advantageous and a factor for stability in the region. He appreciated Pakistan's support for the peace and reconciliation process in Afghanistan. Foreign Minister Makhdoom Shah Mahmood Qureshi, Foreign Secretary Sohail Mahmood, and Ambassador Asad M. Khan were also present in the meeting.