Removing the “dependency syndrome” from Pakistan. When the PTI Government came into power, it inherited a crippled system. The economic system was categorically flawed. The account deficit at that time left no option for the PTI government but forced to approach several countries as well as international donors like the International Monetary Fund (IMF) and borrow about $12 billion for meeting the gap. In FY18, the total deficit amounted to $18 billion. According to the Pakistan Bureau of Statistics (PBS) the trade gap reduced by 1.97 percent to $11.786 billion in July-October FY18 amid stronger exports. Exports of goods rose by $3.52 percent to $7.285 billion as tax breaks on exports, and weaker rupee boosted foreign exchange earnings. Imports gradually inched up to $19.071 billion from $19.060 billion a year. Moreover, Prime Minister’s vision lead to an increase in remittances to Pakistan from 15 percent to $7.419 billion in FY19 July-October. The current account deficit saw a great reduction since the first quarter of the FY19. The central bank expects the current account deficit to be in the range of 5.0-6.0 percent of GDP for FY19 against the government target of 4.0 percent. Amidst the said economic challenge, in January 2020 as WHO declared COVID-19 a global pandemic, Pakistan too was hit by it, leaving the government in an extremely tricky and challenging situation.

PTI-led Pakistani government also became highly alert since 15th January 2020. On 26th February 2020, Pakistan declared its first cases of COVID-19. The virus making its way to Pakistan meant only one thing; from there it will only further spread.

The main challenge posed to the government was equipping an already crippled healthcare especially amidst a worldwide economic slowdown.

Since day one, projections were made, and a spike in the number of patients was expected to be observed in May-June. Keeping in view the deplorable condition of the National Medical Health system, the next challenge posed to the government was to equip the hospitals with necessary medical equipment including, ventilators, PPEs, N-95 Masks, Oxygen Cylinders, ICU beds, properly trained staff for catering the critical patients. Due to the critical situation across the whole world, importing such equipment was yet another challenge. This is the point where native talent came to the front taking up the responsibility to serve the nation.

It all began via the social medium Twitter, after a story on the contribution of 3D printing of life saving equipment i.e ventilators surfaced and National Incubation Center (business incubator across 5 cities of Pakistan under the government) was tagged. Amidst a pandemic this was the only economical and fast way to multiply ventilators. The idea was to create a valve that connects a single ventilator into a multi-patient use ventilator that was possible to be created through a splitter. Following the progress of this model abroad, the team from Shaukat Khanum stepped up when an Australian 3D printing enthusiast Alexander partnered with Pakistani startups and shared the design files. Dr. Faisal Sultan (who is also PM’s focal person on COVID situation) and Dr. Aasim from Shaukat Khanum along with their team connected with the young engineers Abdullah Afzal and his team at Rada. The design files are shared, and within a brief period of time, the 3D printing happens overnight with valve splitters readily available by next morning. A trial run at Shaukat Khanum, suggested modifications after which a successful batch of the valves was successfully printed, increasing the capacity of one ventilator to four. Gradually hospitals across the country demanded the splitters. For ease, the design files are shared with 3D printers across the country from Multan to Karachi. Moreover, a volunteer list of sign ups for 3D printers was created that led to nation wide printing of the splitters across the country. Pakistan Air Force also offered to field-test these splitters.

Among other volunteers for this initiative was Dr Bilal Siddiqui, a mechanical engineer by vocation who in his interview to The Express Tribune stated that his company PAC-V is working on 3D printed ventilators and is also developing a non-contact thermometer, hazmat suits, facemasks and face shields for the healthcare providers. PAC-V led by Dr. Siddiqui, PAC-V comprises doctors, biomedical professionals, engineers, academics, diaspora, resource mobilisers and other smaller groups that are working voluntary to help the government. The group that started off with five volunteers presently has membership in hundreds. Aga Khan Hospital, Liaquat National Hospital, Indus Hospital in Karachi and Shifa International in Islamabad were consulted before launching the initiative and presently National Disaster Management Authority (NDMA), Pakistan Engineering Council (PEC), Pakistan Air Force (PAF) and various universities have shown interest in their initiative.

Similarly, the issue of shortage in PPEs was dealt by locally, where in the first week of April, Sindh Governor Imran Ismail invited a four-member delegation representing the fashion designing and textile industry at the Governor House. PTI law-maker Sidra Imran took the lead on inviting public-private partnership to produce PPEs that are quintessentially “Made in Pakistan” through Unilever and Deepak Perwani liaison, endorsed by Governor of Sindh. 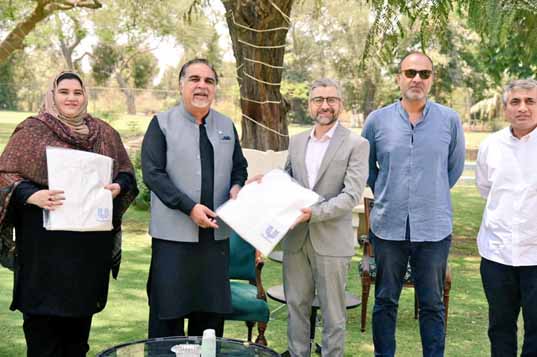 Governor Ismail encouraged the local production of protective gear against the coronavirus pandemic, endorsing less dependence on imported items. Perwani along with Kehkashan Saiyed, Furqan Riaz and Shozaib Kapadia ensured to facilitate the health professionals and volunteers in the challenging times by locally manufacturing PPEs. Later Asim Jofa, Lulusar and other notable brands of Pakistan also joined the cause.

The resilient efforts of the native talent has created a tale of resilience that is riding Pakistan from the dependence syndrome and is paving a path for a self-sufficient Pakistan. Thanks to the talent Pakistan was able to produce the equipment in surplus. Currently Pakistan is exporting the masks and PPEs to USA. Pakistan has also got PPE export orders worth $100 Million which will help a lot in removing current account deficit. The money thus generated might also be used to equip healthcare sector even more.

Prime Minister Khan has always talked about how the Pakistani nation has not been able to reach its truest potential due to “dependency syndrome”, something which was institutionalized by previous governments through lack of incentives for local industry and more lenience on imports. As a result, entire nation had become dependent on imports from abroad and reselling it locally. PM Khan’s quest to remove Pakistan’s dependency syndrome has gone into the second gear amidst the COVID-19 Pandemic. The entire mind set is changing from importing equipment’s to self-sufficiency and eventually export-oriented growth mindset. In Sha Allah, brighter days ahead for Pakistani industrialists and entrepreneurs as “Made in Pakistan” products go global!