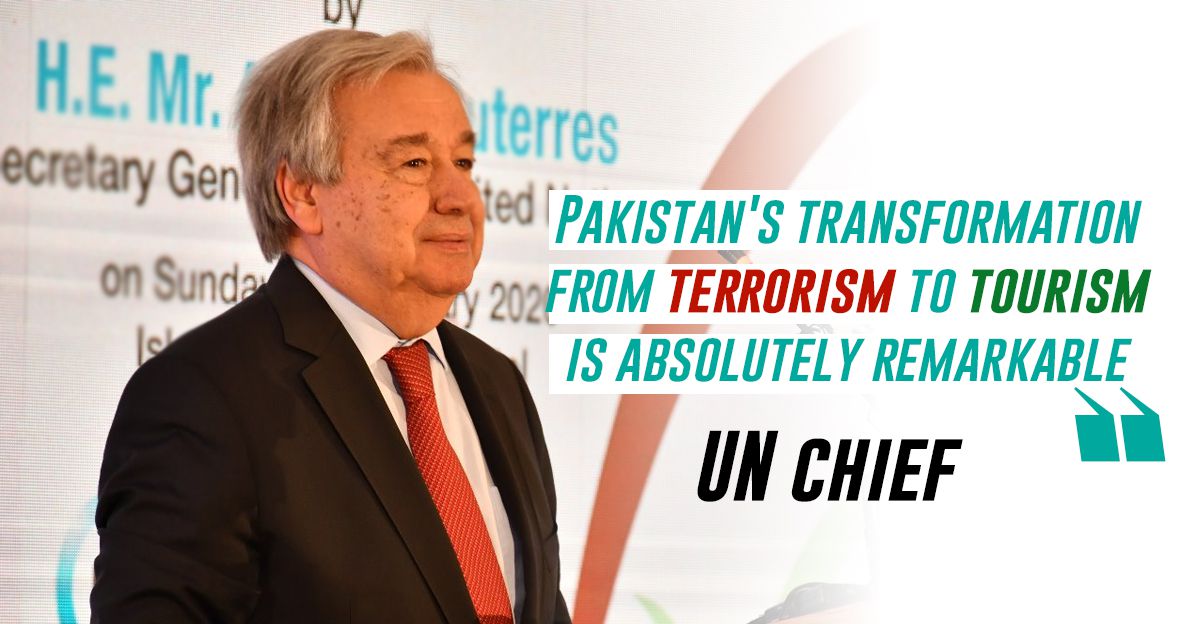 United Nations Secretary-General Antonio Guterres on Monday termed the improved security situation of Pakistan as "absolutely remarkable", noting that Islamabad, which looked like a "fortress" a few years back had now become a family station for the world body's staff.

Guterres was responding to a question regarding "Pakistan's journey from terrorism to tourism" after a seminar at Islamabad's National University of Sciences and Technology (NUST).

"We are witnessing the state becoming present, both from the point of view of security [... and] basic service, development in an absolutely remarkable transformation," he said.

"I can see how Pakistan not only opened its borders, in a world where so many borders are closed, but Pakistani people open their houses and their hearts in [an] enormous demonstration of generosity," he said while referring to the influx of Afghan refugees in Pakistan.

"At the same time, I have seen the commitment of Pakistan to peace, namely to support peace in Afghanistan," he added.

Guterres also appreciated the contributions of Pakistani troops to UN peacekeeping missions. "Pakistan has been lever in making peacekeeping more effective, more accountable and with a stronger capacity to protect civilians and to make the blue helmets an essential force for peace."

"I want to pay tribute to the very strong commitment of Pakistan to multilateralism and to United Nations," he said.

Earlier, during the seminar arranged by NUST, he had paid rich tribute to Pakistani peacekeeping troops and hailed their "professionalism [and] commitment". He commended the peacekeeping troops for their efforts to bring peace in countries struck by war and violence.

Ahead of his arrival, Guterres had said he would express gratitude for those serving as peacekeepers.

Taking to Twitter, he said: "Pakistan is one of the most consistent and reliable contributors to UN peacekeeping efforts around the world.

"I am traveling to Pakistan, where I plan to express my gratitude to the people #ServingForPeace."

Pakistan is one of the most consistent and reliable contributors to @unpeacekeeping efforts around the world.

I am travelling to Pakistan, where I plan to express my gratitude to the people #ServingForPeace. pic.twitter.com/81PuuIZ9kw

The UN chief was on a four-day visit to Pakistan to attend an international conference on Afghan refugees.

Earlier today he spoke at the international conference '40 Years of Hosting Afghan Refugees in Pakistan', where he insisted that the world "must recognise that international support for Pakistan has been minimal compared to [its own] national efforts" for Afghan refugees.