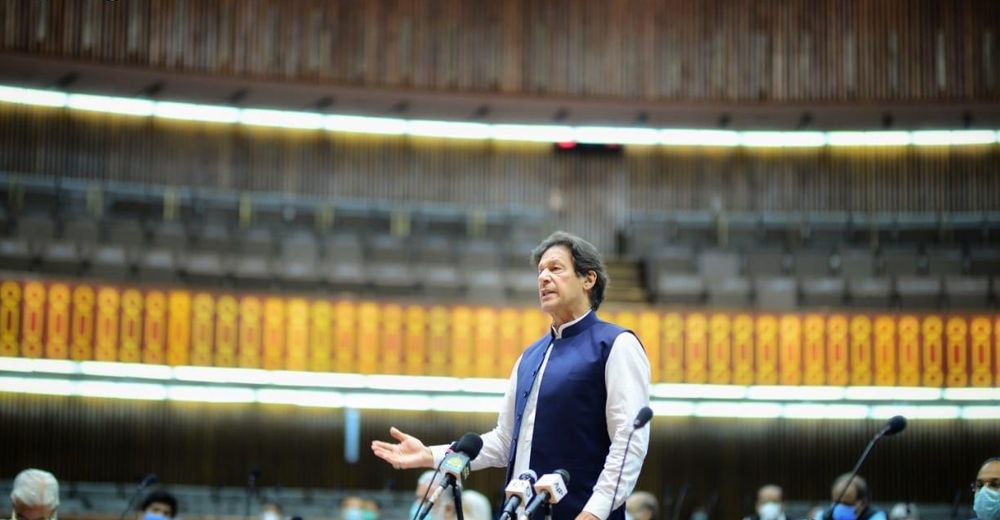 Prime Minister Imran Khan has once again emphasized the need to create awareness among masses to strictly follow the standard operating procedure to prevent spread of COVID-19 pandemic.

Speaking in the National Assembly today [Thursday], he said our health system can cope with the challenge of pandemic if people strictly follow the preventive measures and burden on hospitals will increase if SOPs are not adhered in letter and spirit.

The Prime Minister said that it is an obligation on us to protect our elderly and sick people, patients of heart and blood pressure and chronic diseases.

Imran Khan said that Tiger Force has been deployed to convince people to observe SOPs to prevent contagion.

The Prime Minister dispelled the impression that there was any confusion on part of the government in taking measures to cope with the challenge of coronavirus.

He said we enforced lockdown as soon as we detect just twenty cases in Pakistan but it has been my consistent fear that corona is a phenomenon that nobody can predict anything about it.

He said in view of high density population in Pakistan we cannot enforce complete lockdown for longer period of time as we have to protect our people both from coronavirus and hunger.

He said the government established National Command and Operation Centre to gather data, get expert opinion from doctors, input from provinces and evaluate world’s trends in dealing with the pandemic.

He said now we have verified and updated data about corona patients and availability of necessaries medical equipment, including personal protective equipment, ventilators and beds in hospital.

Imran Khan said we introduced smart lockdown instead of complete lockdown to protective our people from the disease and hunger. He said thirty-four percent people have gone below the poverty line in India due to complete lockdown which vindicate our stance of not going for complete curfew.

Discussing the way forward, the Prime Minister said the government has decided to give priority to the construction and agriculture sectors. He said we have given historic package for the construction industry.

Thirty billion rupees have been allocated to provide affordable houses to the people on low interest rate. He said the government has not cut the Annual Development Program but reduced its non-development expenditure.

The Prime Minister said the focus is also being given to expansion of industrial sector to revive the industries. For this purpose, duty on thousands of raw materials have been abolished.

Imran Khan said it is also our effort to reopen the tourism sector with SOPs in order to protect the livelihood of the people associated with this industry.

Drawing a comparison between performances of his government with the previous ones, the Prime Minister said the present government inherited the current account deficit of twenty billion dollars which has now been reduced to three billion dollars.

He said the borrowing from the State Bank stood at six trillion rupees when PTI came to power but it has been brought down to zero. He said our tax collection witnessed a growth of 17 percent, and non-tax revenue 33 percent before the breakout of the Coronavirus.

He said Foreign Direct Investment rose to 2.1 billion dollars from one billion dollars. During this period, our remittances and exports also registered a growth.

Regarding dealing with the locust challenge, the Prime Minister assured all out efforts will be made to meet the challenge. He said NDMA has been authorized to make the necessary purchase to control the crop munching pests.

Prime Minister Imran Khan has said that Kashmir dispute stands internationalized because of our efforts. He said the whole world is witnessing the persecution of Muslims in India and Occupied Jammu and Kashmir.

The Prime Minister said the government has prepared a plan to further raise this lingering dispute at the world level. Expressing concerns over the situation in Occupied Jammu and Kashmir, he said India has deployed eight hundred thousand troops in the territory to suppress the Kashmiri people.

He said this is unsustainable. He said the Kashmiris movement for their right to self-determination cannot be stopped and it has reached the point of no return after illegal annexation of Kashmir by abrogating Article 370 of the Indian constitution, scraping special status of the Kashmir state.

He said Modi is a fanatic who is involved in persecution of minorities under its RSS inspired Hindutva ideology. He said Modi has committed a massacre of Muslims in Gujarat.

Regarding Foreign Policy of his government, the Prime Minister said today Pakistan enjoys cordial relations with the United States. He said it has been his consistent stances that we will not participate in any US war but will always be ready to facilitate any peace talks.

He said the United States acknowledges Pakistan role in peace process in Afghanistan and we are trying to facilitate in this regard. He said peace in Afghanistan is in the best interest of the region.

Imran Khan also elaborated that Pakistan is also trying its best to improve relations between the Saudi Arabia and Iran.

• Give gratitude to Shafqat Mehmood for doing 2 things o Ending education apartheid between English medium, Urdu medium and Religious Madrassahs, we will have one syllabus from March 2021 after consulting all schools

o This has serious repercussions for our relations with them

§ State to take responsibility of the people of nation. Any country that runs on these rules of Medina will succeed. We can learn a lot from China, they did what the state of Medina did by bringing 700 million out of poverty and it’s a matter of time before they become a world power. That is why we are focusing on the EHSAAS program