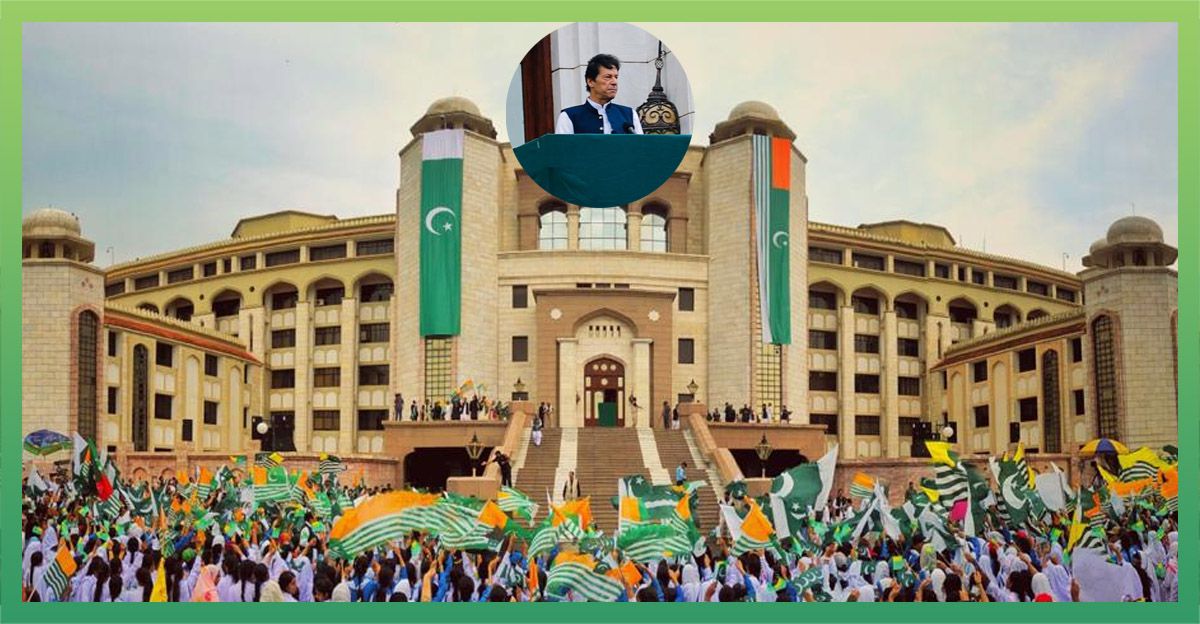 Today, entire Pakistan, whether they are school children, college students, shopkeepers, labors or employees, we all have gathered here to show support towards our Kashmiri Brethren Our Kashmiris are going through a very tough time, almost 80 lac Kashmiris are under a brutal curfew for past 4 weeks. The purpose of today’s gathering is to tell Kashmiris that we are standing with them in their sorrow and Pain. Today, a message will go from Pakistan that until our Kashmiris don’t get their freedom, Pakistan will stand firmly with them in their struggle until our last breath

This is important for all of us to understand that which type of Indian Government, who is inflicting atrocities on Kashmiris, we are dealing with. In order to understand them, we need to understand the ideology of RSS. RSS was formed in 1925 based on the motivation of hate against Muslims. Impressed by Nazi party of Hitler, They believe that Hindus are superior. Hitler used to believe that non German races should either be killed or kicked out of Germany. Similarly, ideology of RSS preaches that either non-Hindus should be kicked out or live a life of a second class citizen; they cannot have equal rights. We are witnessing that precise manifesto being implemented in Kashmir. This fascist ideology has overtaken India, the way Nazi party took over Germany.

They believe they should teach a lesson to Muslims because Muslims ruled subcontinent for centuries. Today, the entire world can see what is happening in Kashmir. If today, Kashmiris wouldn’t have been Muslims then the entire world would have been standing with them. With immense regret, I have to say that when Muslims go through unjust treatment, the so called international community and organization like UN stay silent. When I say I will be the ambassadors of Kashmir, I promise that I’ll fight for Kashmir’s struggle until Kashmir attains freedom. Today, my opinion article has been published in NY times, one of the top newspaper of US. Through that article, I have shared the situation of Kashmir with the world. The article also speaks about the RSS ideology which has overtaken India.

The ideology of RSS is not only fatal for Muslims but for Christians and all those who have moderate mindset living in India. The secular ideology of Gandhi and Nehru that all races and religions are equal, is heavily negated by RSS, neither have they accepted it nor they follow it. It was a member of RSS who murdered Gandhi. They have disregarded international law, Indian constitution, and High Court order of Jammu & Kashmir. They only follow Hindutva concept I’ll raise Kashmir issue at UNGA conference. I have already raised this issue with the heads of the world, US President Donald Trump, German Chancellor Angela Markel, President of France Emmanuel Macron and with our leaders from Muslim world. I have raised concern that if today the world will not support Kashmiris against this fascist racist government of Modi then the entire world will bear the impact of this. The way World did not stood against Hitler when he attacked Czechoslovakia and Austria, it resulted in the loss of 50 to 60 million people in 2nd world war. Today, if the world will not stand against the fascist government of Narendra Modi and their atrocities in Kashmir, this will go beyond Kashmir. We know that Hindustan is trying their level best to divert world’s attention from Kashmir.

They are trying to carry out a false flag operation. We are telling right now that they are plotting Pulwama sort of incident and I want to tell Narendra Modi that if they will attack Azad Kashmir, we will give a befitting response. Our armed forces are ready, if Azad Kashmir will be attacked, we are ready to respond! But the world must learn that if two nuclear armed nations will come face to face, not only subcontinent will suffer but the entire world will face the consequences We have been raising this issue at all diplomatic and political forum. I have raised the issues with foreign media, heads of the states and inshAllah I will speak at UNGA.

Our foreign minister is talking to his counterparts all over the world and preparing the world that if today you’ll stay silent on this issue, the world will bear the impact We are going to run a worldwide campaign to elevate the Kashmir curfew. We will engage our overseas Pakistanis, human rights organization, celebrities, and anyone who supports human rights, we will involve them. Kashmir is under a lockdown for a month now. No one is allowed to go there, be it common people, media and even the leaders of Indian opposition parties. The entire world must know what sort of atrocities are being carried out that they are not even allowing their own opposition parties to enter. So, today the entire nation of Pakistan is out to show solidarity with Kashmir. I thank my nation and I would like to tell our Kashmiri brethren that we are with you. Narendra Modi, in his arrogance, has played the last card by inflicting atrocities in Kashmir and my heart says that after his imprudent move, Kashmir will be liberated. Pakistan Zindabad!