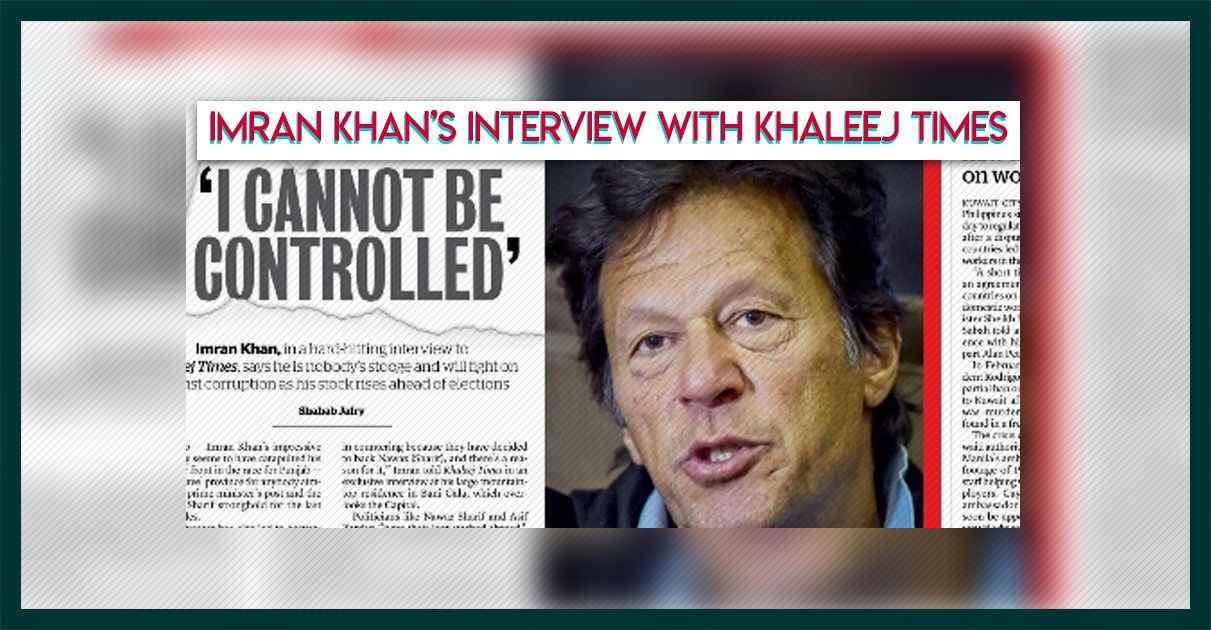 Imran Khan's impressive Lahore rally seems to have catapulted his party to the front in the race for Punjab - the 'must have' province for anybody aiming for the prime minister's post and the traditional Sharif stronghold for the last three decades.

Yet the success has also led to accusations, particularly from the ruling PML-N, of PTI being the new favourite of the country's military establishment. And it is no longer just PML-N firebrands accusing the PTI of playing into the military's hands. The foreign Press has also started running headlines about Imran's fortunes rising as he warms up to the military. And he has yet to counter these claims. "There is no point in countering because they have decided to back Nawaz (Sharif), and there's a reason for it," Imran told Khaleej Times in an exclusive interview at his large mountain-top residence in Bani Gala, which overlooks the Capital.

Politicians like Nawaz Sharif and Asif Zardari "have their loot stashed abroad". Their agenda, according to Imran, is to tell foreign governments through their Press that they would bend to any length to protect their wealth, even at the cost of Pakistan's sovereignty.

"I have no money, properties or bank balance abroad," he stressed. "Therefore, I cannot be controlled because of any money laundered."

All foreign agencies know, Imran said, of their (Nawaz's and Asif's) wealth abroad, which makes them vulnerable. And with no other way of countering PTI's momentum, the military-stooge card is their last option.

"They have the cheek to say that the 29 April jalsa (rally) was held by the army," he said, adding that "PML-N could never gather such a crowd even though Lahore is their backyard. Even Gen Musharraf, with army support, could not hold such a jalsa.

Reeling from disqualifications and a string of defections, PML-N is continuously trying to play down the significance of PTI's large rallies. It is also criticising Imran for always giving street rallies precedence over political institutions, especially parliament. Imran, on the other hand, blames Nawaz Sharif for making the House "completely impotent."

"Everything we achieved was out of parliament," he said. "If I had not gone to the streets, we would have achieved nothing."

It was his relentless protesting in 2016, after all, which triggered the long process that resulted in Nawaz's disqualification in 2017. And it's not as if he did not knock at parliament's door. PTI first raised the Panama Papers issue in the National Assembly, then in the Public Accounts Committee (PAC) and then approached the Election Commission (EC), with no luck.

"It is the opposition's job to ask questions," he said. "But instead of providing answers, the speaker, PML-N, its senior ministers, all protected Nawaz and victimized me."

After Imran's objections, four cases were instituted against him in the Anti-Terrorism Court (ATC), four petitions were filed at the Election Commission (EC) and two cases at the Supreme Court.

"Remember Khawaja Asif - former federal minister, now disqualified for life - said recently that Nawaz Sharif was instrumental in Asif Zardari taking over the Peoples Party?" he pointed out, and reminded that "later when Sharif was in trouble Zardari came to his rescue."

And that is because their interests are aligned - "assets abroad that they cannot account for," so they cover each other's corruption.

"Now we have a situation where both sides in the House protect each other's money laundering, which is unheard of." And now that the Panama case has exposed Nawaz and turned the tables on the ruling party, the Sharifs are hitting back by maligning state institutions, especially the judiciary and military.

"Nawaz Sharif has clearly decided that the country's institutions can go to hell," he said.

"He is prepared to destroy the judiciary and discredit the National Accountability Bureau (NAB) just because he got caught, even though never has one man been given more chances to clear his name."

If Nawaz were innocent, Imran said again and again, he should simply answer two simple questions and that would be the end of it. "One, where did the money for those properties come from? And two, how did you get it out of Pakistan?"

Instead, Nawaz lied to parliament and the Supreme Court, and continues to blame a 'conspiracy' for his ouster and there's still no money trail, especially the "$3 billion in 16 companies by his sons."

Ever since the Panama Papers blew the lid off the magnitude of the ruling party's "looted wealth", Imran's party's stock has risen because of its long-standing position about mega corruption right at the top of the political pyramid.

"I have always said that corruption is Pakistan's biggest issue; a bankrupt country which can attract little attention yet haemorrhages $10 billion annually to money laundering," he thundered, before turning his guns on Shahbaz Sharif, Nawaz's younger brother and new president of PML-N.

"Shahbaz is as big a criminal as Nawaz," he claimed. "There's been no development in education, health or any human development indicator yet he spends Rs40 billion of a poor country on personal advertisements."

Calling Shahbaz and his sons "Corruption Company Limited", Imran explained their obsession with mega projects simply as a means for mega kickbacks.

"My contention is that if you look into any mega project in Punjab and Sindh, there will be corruption leading right to the top," he claimed.