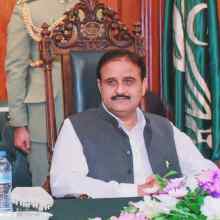 He served as District Nazim of Taunsa Sharif from 2001 to 2008. Mr. Usman Buzdar belongs to the Buzdar clan, which is a Baloch tribe.

He received a master's degree in political science from Bahauddin Zakariya University and received a degree of bachelor of laws from the Law College, Multan.

He was elected to the Provincial Assembly of Punjab as a candidate of PTI from Constituency PP-286. He received 26,897 votes

On 17 August 2018, Imran Khan nominated him as PTI's candidate for the office of Chief Minister of Punjab.