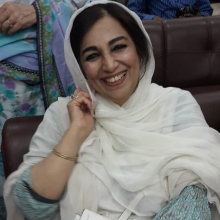 Saloni Bukhari was a senior and founding member of  PTI. Her demise was indeed a great loss for us. As a committed and hardworking leader, she was entrusted with the role of the PTI central vice president as well as Punjab’s Women Wing president. Besides, she was the member of the core and central executive committees.

In a tweet, Chairman Imran Khan expressed his shock and grief over the death of Ms. Bukhari who worked with him for 21 years. “Devastated by the loss of Saloni Bokhari who lost her battle to cancer this morning. She stood by me through thick and thin. She was there when the party passed through its greatest crisis.”