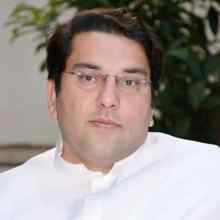 Saifullah Sarwar Khan Nyazee joined PTI in June 1996 at the tender age of 22. His political thought was nurtured by none other than Imran Khan as he had the unique opportunity to work intimately with his leader and mentor for nearly two decades of his formative years. Eventually, he worked his way up to become Additional Secretary General of PTI in 2009. He organized the party at the grassroots level which helped PTI build momentum up till the 30 Oct 2011 Jalsa. He also organized most of the important PTI events including the 2014 Dharna.