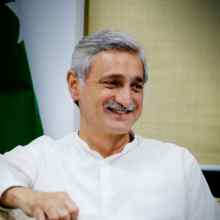 Born in 1953, Mr. Tareen received his early education from Saint Mary Rawalpindi and Sadiq Public School, Bahawalpur and stood for his matric and F. Sc. Exams from Karachi. He graduated from F.C. College in Lahore. Upon graduation, he proceeded to the United States of America for higher education and was awarded the degree of Masters in Business Administration from the University of North Carolina in 1974.

Mr. Tareen brings with him, rich and varied experiences in the private as well as the public sector. After a teaching stint in the Department of Public Administration, University of the Punjab, Mr. Tareen joined Grindlays Bank, Lahore for a short period of three years.

After leaving the Bank in 1978, Mr. Tareen ventured into Farming at his family farm in Lodhran. He developed and enlarged it by buying a nearby piece of completely barren land which he developed over a period of 20 years. Mr. Tareen now manages an over 2000 acre mango, cotton and vegetable farm using the most modern farming methods.

Mr Tareen’s experience in business world began when he was made the CEO of his family-owned beverages business in Multan in 1981. Over the next eight years, he increased the business manifold and in the year 1989 Pepsico International offered him a franchise in Lahore. Mr. Tareen took over the franchise in 1991 as the Chairman of Riaz Bottlers Limited and developed it into one of the Pakistan’s best operating franchise. He went into sugar business and established his first sugar mills in 1992 as JDW Sugar Mills. This has grown into Pakistan’s largest and most efficient Sugar milling operations (JDW Sugar Mills). This is the only Sugar Mill in the country, which is supported by its own Sugar Plantation (30,000 acres) and Sugar cane research organisation. The Mills runs an extensive community development programme geared towards increasing yield and profitability of small farmers while also funding education and health initiatives in its area of operations. The per acre yield of sugarcane in Rahim Yar Khan has doubled due to the Cane Development Program of JDW Sugar Mills. While per acre production cost has been reduced by innovative cultivation and production techniques. It’s due to the combined efforts of sugarcane development, farmers’ training, motivating farmers with timely payments, that sucrose recovery in the operating area of JDW Sugar Mills jumped from 8.2% to almost 11% in 2016.

Mr. Tareen was called into public service in 1997 as Chairman of the Punjab Task Force on Agriculture which addressed pressing issues pertaining to the agricultural sector by formulating and implementing innovative policies which left a lasting impact on the sector, most notable of which was the complete annihilation of agriculture pesticide adulteration in Punjab and the ‘One Window’ Agriculture Loaning Operation in which small farmers were able to obtain loans from the Agriculture Development Bank in one seamless operation.

Mr. Tareen brought his innovative management abilities into pubic sector and among other initiatives, created Crop Management Committees to manage each large crop through its production cycle. These Committees comprised of experts as well as leading farmers and all other stakeholders.

In July 2001, Mr. Tareen was appointed Chairman, Punjab Task Force on Wheat Procurement & Marketing. He got the Wheat Procurement Policy completely revamped fixing the loopholes to make the process corruption free and transparent. He also devised the strategy to procure surplus wheat and to market it for possible export.

Mr Tareen began his political career when he was elected Member of the National Assembly of Pakistan in the 2002 General elections from NA-195 Rahim Yar Khan. He became Advisor to the Chief Minister, Punjab, on Agriculture and New Initiatives in social sector, a position especially created in the Chief Minister’s office for developing and implementing “out of the box” solutions for some of the many pressing problems of the province.

In a successful two year stint, many significant new initiatives were taken and implemented, most notable among them were the Punjab Education Reforms Program, the RYK Model of Primary Health Care management through BHU’s, the new Punjab Industrial Policy, the creation of Sunder Industrial Estate through the management model of Section 42 not-for-profit company which brought public and private management together for the public good.

Mr Tareen was brought into the Federal Cabinet of the new prime minister, Mr Shaukat Aziz, as the Minister of Industries, Production and Special Initiatives in August 2004.

Mr. Tareen is cognizant of the fact that while Pakistan must rapidly industrialise to provide the economic growth necessary for job creation and poverty alleviation, it must, at the same time, take direct Poverty Alleviation Initiatives so that the people of Pakistan share the fruits of economic growth as soon as possible.

Various other initiatives were taken. These were created on the basis of public private partnership as Section 42 companies under the umbrella of PIDC.

Mr. Tareen firmly believes that in order to eliminate poverty on a long term, sustainable basis, communities have to be empowered and given the correct tools/support so that they can take themselves out of poverty. This belief and commitment to poverty alleviation led Mr. Tareen to set-up Lodhran Pilot Project (now known as Grassroots Pakistan) in 1999. Grassroots Pakistan is currently engaged in providing sanitation, clean drinking water, healthcare, artificial limbs, vocational training and women empowerment. Working mostly in South Punjab the organization helps thousands of people every year.

A firm believer in the importance of education, Mr. Jahangir Khan Tareen established Tareen Education Foundation (TEF) in 2010. TEF adopted 85 government schools (15,000 students) in District Lodhran, south of the Punjab. Main objective of this initiative has been to demonstrate that public schools, even in rural areas, can become centres of excellence where poorest of the poor can receive modern education with dignity and pride. TEF has spent Rs. 300 million during last six years on upgrading existing schools, construction of additional classrooms, provision of furniture, modern books, 200 teachers, 98 support staff, setting up libraries, restoring science and computer laboratories, training of teachers and introducing innovative programme of studies.

TEF’s professional and focused commitment has led to improved physical infrastructure, increased enrolment, reduced dropout and brought about a positive change in the learning culture in government schools in Lodhran.
The People’s Primary Healthcare Initiative (PPHI) which began in Punjab now manages all Basic Health Units in 78 Districts of Pakistan. A recent DFID funded Third Party Evaluation of the PPHI by International Consultants has confirmed the model as the future of primary health management in Pakistan. Mr. Tareen is the founder of this initiative and is currently the Chairman of the National Steering Committee on PPHI overseeing the entire program.

He resigned from the National Assembly as well as PML(F) in December 2011 and joined Pakistan Tehreek-e-Insaf (PTI). He was appointed Chairman, Policy & Planning, and formulated policy papers regarding health, education, energy, local government, etc. Subsequently he was appointed Secretary General PTI Having joined PTI, Mr. Tareen moved his political career back to his home at Lodhran and fought the GE 2013 from NA-154. He officially lost the election but after two and a half year’s battle in the election tribunal, the election was declared null and void on the basis of massive rigging / irregularities in the election process. Supreme Court upheld the decision of the election tribunal and ordered the bye-election to be hold in Lodhran which took place on 23rd December, 2015. Mr. Tareen resoundingly won the bye-election with a margin of almost 40,000 votes in spite of interference of the Punjab and Federal Government and use of the entire state machinery. He is currently serving as the Member of National Assembly and continues to be the Secretary General of PTI.

More info on Jahangir Khan Tareen can be found at https://jahangirktareen.com