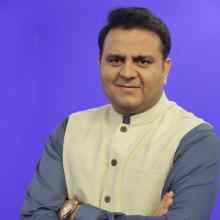 Federal Minister of science and technology

Fawad Chaudhry is a lawyer by profession and politician by passion. He joined the media only a few years ago but has emerged as a powerful voice on our television screens.

Chaudhry belongs to a prominent political family of Punjab – his grandfather and other family members have occupied various important positions in the past. He himself has been the adviser to the Prime Minister of Pakistan. Fawad Chaudhry has served as the Secretary Information and Central Spokesman for the Pakistan Tehreek-e-Insaf (PTI).