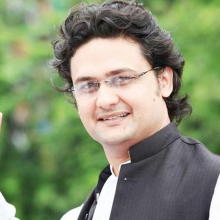 •       Became the member of Imran Khan’s movement for justice party “Pakistan Tehreek-e-Insaf in 1996 the same year when the party was formed.

•       Currently serving as Central Additional Secretary Information and Head of Marketing. He is also a member of the Core Committee and Central Executive Committee of the party.

•       Faisal joined Pakistan Tehreek-e-Insaf as he never wanted to be a part of traditional politics in Pakistan. Imran Khan started a movement challenging the status quo and corruption in Pakistan which attracted young people like Faisal to this movement for justice.

•       He was part of the young team that campaigned in 1997 elections and in 2002 elections he was media in-charge of the Islamabad constituency.

•       Faisal who opens rallies for Khan, is known nationally as “Voice of PTI,” introducing Khan to crowds across the country. His easy confidence and broadcaster’s voice make him one of the more prominent young faces of Khan’s media-savvy corps.

•       He has hosted more than 500 rallies for Imran Khan from Waziristan to Quetta to Karachi to Lahore and across Pakistan including the historic Minar-e-Pakistan Jalsa on October the 30th, 2011.

•       He also made a record of hosting public rallies for more than 126 consecutive days as part of the protest against election rigging staged in the capital city of Islamabad.

•       In 2008 he was appointed in the media department due to his professional expertise in the same field.

•       He has also served the party as Deputy Secretary Information, Head of Electronic Media Operations, and Secretary Social Media previously.

•       Faisal has represented PTI across different local and intl media outlets and conferences.

An advertising/marketing specialist, broadcaster/producer by profession and have been associated with the field of production, advertising and media for past 17 years.

Has led teams across different functions and produced over 300 Ad-campaigns and TV commercials including several award-winning campaigns for Pakistan’s leading brands.

Worked on some key positions in the advertising/media industry and helped launch some mainstream brands primarily in Telecom and Branchless banking sector.

Has also won multiple local and international awards in campaign development and media management including Campaign of the year award and Best Digital Campaign Award at the biggest advertising awards of Pakistan.

Has also been a broadcaster for over ten years on Radio.