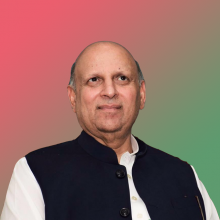 A successful businessman, philanthropist and politician. Mohammad was born in Faisalabad – Pakistan, and moved to Scotland in the mid 70’s to join his wife Perveen with whom he now has four children.  After arriving in Scotland he became successful in the Scottish Wholesale sector, and then went into politics becoming Britain’s first Muslim MP and Scotland’s first ethnic minority MP.

Member of the Labour Party, since 1984

Selected by the Prime Minister to visit Sri Lanka as part of a Parliamentary delegation lead by Rt. Hon. Des Browne MP during the period of civil unrest in 2009.

Member of Parliamentary delegations, to visit and strengthen Britain’s ties with

During his tenure as an MP he has been an active member of over 20 All Party Parliamentary Groups (APPG’s), and has been an office bearer of the APPG on Pakistan, Secretary to the APPG on Terrorism, Chairman & Vice-Chairman of APPG on Kuwait

Member of Scottish Friends of Palestine

Advisor to Board of Trustees, Taleem Trust Glasgow

Advisor to Board of University of Management and Technology – Lahore, Pakistan

Directed a successful international fundraising campaign for the Ucare Foundation (formerly the Pakistan Foundation), enabling it to establish 3 state of the art free hospitals in rural Pakistan. The first Foundation hospital opened its doors in 2006 and now treats over 5000 patients a month

Worked with the Chief Minister of Punjab to help improve emergency service’s provision in Punjab, which amongst other things resulted in the setting up of Rescue 1122 - a dedicated free hotline number for accessing the Punjab Emergency Services

Successfully led the campaign to save Scotland’s Shipyards

Founding member, Save the Bosnian Campaign, 1995

Campaigned against war in Iraq in the Parliament.