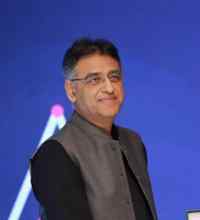 Born in 1961 in Rawalpindi, Pakistan, Asad Umar is currently one of the most prominent leaders of Pakistan Tehreek e Insaf.

His father was an Army officer and his family has a long history of military career. He is the youngest among 7 siblings. Umar graduated as an MBA from the Institute of Business Administration, Karachi in 1984. Although he is a renowned political figure, he is equally famous and respected because of his role and contribution in Pakistan’s corporate sector.

Umar’s 27-year career at Engro began in 1985, when the company was still a subsidiary of ExxonMobil, the global oil giant. He joined the company as a business analyst, and was working for it abroad in Canada when the famous management buyout of Engro took place in 1991.

Umar came back to Pakistan and in 1997 was appointed the first CEO of Engro Polymer & Chemicals, the group’s petrochemical arm. Later, he was elected as the President and CEO of Engro Corporation in January 2004 after which he transformed the business from a mere chemical company to a giant conglomerate.

On March 8 2009, Mr. Asad Umar received the Marketing Association of Pakistan (MAP) Award of Excellence for 2009, in recognition of his contributions to the field of Marketing & Management and his positive role in Pakistan’s economy..

What he has to say about his success

Asad Umar can easily be counted among the most successful and well-known figures in the country. However, when asked what he has to say about it, he simply credits luck to be the most important factor of his overwhelming success.

Apart from fate, he believes one really needs to find something they are passionate about so they can find the drive to work hard. After that is done, he believes that one needs to evaluate to see if they are good at what they have chosen to work for. This, he says, is where his luck counted the most.

Why did he leave the corporate world to join PTI

Asad Umar felt that there was space to create a positive impact in trying to make a difference in Pakistan by participating in mainstream politics by joining PTI in 2012. He was made Central Senior Vice President of PTI the same year.

Asad Umar believes that fundamental change in the system can only come through elected representatives in the National Assembly.  This is because the right people come up with and implement right policies, contributing to every individual’s rights being protected and therefore contributing to a society based on justice and equality.

At PTI, he is part of committee to work on a draft paper to suggest economic reforms to take Pakistan out of current financial crisis.