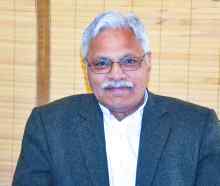 An introduction of Arshad Dad - The new Vice President of PTI

Prior to this, he was Convener of the Central Disciplinary Committee which reports the Chairman.

Arshad Dad, joined PTI weeks after it was founded in Lahore on April 1996.

He contested the 1997 election on a PTI ticket from Gujrat.

Brig Sahib Dad got elected from Gujrat on the PPP Ticket and became a provincial minister in Zulfiqar Ali Bhutto’s government.

Arshad Dad is an Electrical Engineer by profession and graduated from UET Lahore in 1971.

He joined PTV in 1972 and resigned 9 years later

He is a social worker and philanthropist. The family has established a Trust in their father’s name, Brig Sahib Dad Khan Welfare Trust. The Trust functions from Tehsil Kharian of Gujrat operating a purpose-built facility that caters to orphans, providing them with primary and secondary education and vocational training under one roof.