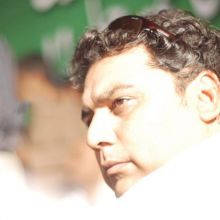 Syed Ali Haider Zaidi was born, bred and educated in Karachi.  He is married and is father of two young children.

His professional career includes being a successful entrepreneur and small business owner with vast experience of operating businesses in various sectors.

Mr. Zaidi was Founding President of the Imran Khan Foundation US, an IRS tax-exempt 501 C-3 charity organization based in the US from October 2005 to January 2012.

In 2000, he joined Pakistan Tehreek-e-Insaf (PTI) as a general member.

In the 2002 general elections, he formally started his political career as PTI's candidate for Ps-116 in Karachi.

Furthermore, he served as International Coordinator from 2004 until 2008 and organized PTI chapters around the globe.

In 2012, Mr. Zaidi served as Vice President Sindh for a short period of 6 months.

On December 26, 2014, Chairman Imran Khan appointed Mr. Zaidi as President of PTI Karachi Region and he remained in this post until January 16, 2016 when all party offices were dissolved due to scheduled intra-party elections.

During his tenor as PTI Karachi President, Mr. Zaidi began organizing and restructuring the party from the grassroots levels.  He led the party’s campaign in the local body elections in Karachi in December 2015 and successfully found candidates to contest for over 90% of Union Council seats.

Besides being a member of the Core Committee, also currently on the list of official Spokespersons of PTI.