Where were you? For there's still time to redeem yourself - Insaf Blog | Pakistan Tehreek-e-Insaf

Where were you? For there's still time to redeem yourself - Insaf Blog 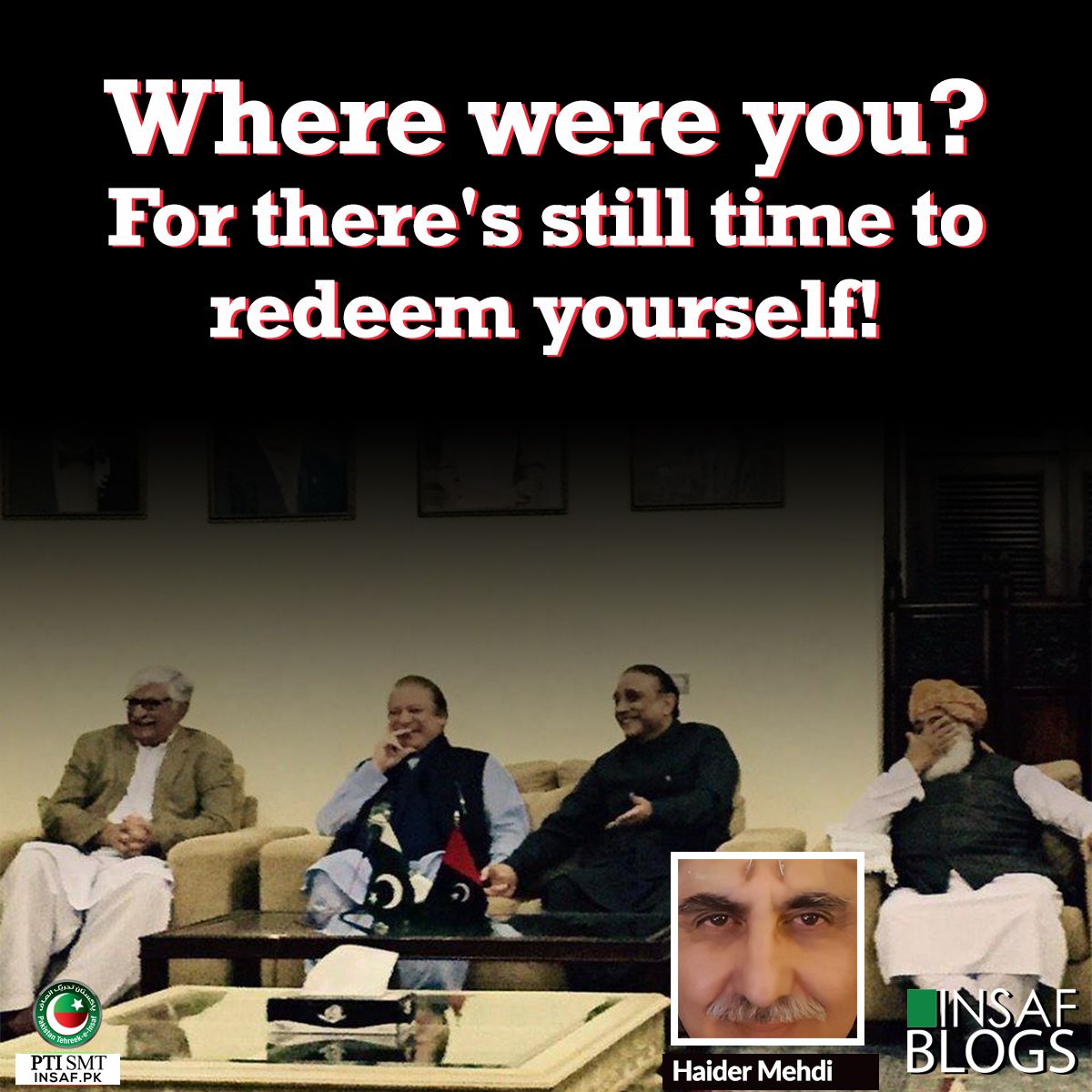 Just look at the enemies surrounding Imran, the Supreme Court, NAB and the Army!

Then the misguided and the misinformed.

Then those whose political, economic and social stakes are wedded to this terrible status quo of corruption, loot, plunder and institutional destruction.

And most dangerously those who want a weak Pakistan ruled by the corrupt. A Pakistan with a weak Army. A nuclear defanged Pakistan.

They certainly don't want a progressive, forward looking, democratic Pakistan with strong institutions and leadership, working for its people and not the current rich corrupt elite!

Now take a  look at the media and writers and intellectuals who make fun of him. Deride him. Run him down.

And they do it so very cleverly. They cloak their daggers in silky narratives of "Saving democracy" "Army political meddling" "Judicial Activism" " NAB witch hunt", "Religious obscurantism"!

Not perfect, I agree, but substantial enough for everyone to see in five years first term.

All they can see is the resignation of the Ehtesaab Chief. That's all they concentrate upon.

But none will highight that for 4 years NAB was under a Nawaz toady called Ch. Qamarruzaman and were unable to investigate and or file a reference of any substantial corruption or wrongdoing in KP or against those who are close to Imran.

They lambast the Supreme Court and the Chief Justice for exceeding his mandate, but forget that the same Court, disqualified Jehangir Tareen.

They forget that with all state institutions lying on a death bed, the Supreme Court had to step in.

They question the Panama and accountability court's judgements but forget the criminality of the Sharifs and the Zardaris and their terrible abject deliberate misgovernance and criminality.

They question Hanif Abbasi's conviction as a witch hunt, forgetting that this man has possibly been responsible for sending tens of thousands if not hundreds of thousands into the dark abyss of lifelong drug addiction and abuse!

Then Shaukat Siddiqi. The one who calls himself a Judge! Muddying the waters of his corruption and misuse of authority and nearing his conviction, wants to die as a political martyr in a hail of his own calumny! A petty, hypocrital liar, worthy of nothing but contempt.

They question Imran's monetary handout to Sami ul Haq's seminary as evidence of his support for Taliban like organizations.

So if that's true; is KP now a more radicalized province then it was before?

I also questioned Imran on this in my interview. His answer which he has shared publicly hundreds of time.

Do we leave the hundreds of thousands of madrassah kids, failed by the State, to the mercies of obscurantist thought or do we attempt to exercise oversight over them and teach them skills so they become positive contributors in our society vs being brainwashed into a life of intolerance, guns and violence?

So yes we paid them to establish a teacher training college, upgrade their facilities with computers and curriculum to teach non religious subjects.

In return we got membership on their board and management control and most importantly, authority of approval of their curriculm with complete oversight by the KP Board of Education.

But who wants to talk about the rationale and the impact?

Who wants to talk about the crippled life that awaits those thousands of children without polio drops, because their parents and guardians were brainwashed by an obscurantist thought?

Internationally just look at the Indian and Western press and segments of our own media!

Look at the slander and the pettiness of the filth being heaped on our Judiciary, our Army, the NAB and Imran by his political opponents and many so called enlightened and educated!

So here are my questions  to all who have joined this battle to defame Imran and hit out at our Judiciary, our Army and the NAB!

Why would you support known criminals, crooks, plunderers, money launderers like Nawaz and Zardari?

Why would you NOT support people and forces who are desperately trying to save Pakistan from collapsing and anarchy?

Why are you all pointing your guns at the Supreme Court, NAB,  Imran and the Army?

Why are all of you desperately trying to scuttle and sabotage efforts to strengthen Pakistan?

Where were you alongwith all anti Imran, anti Judiciary, anti Army political forces when the wholescale loot and plunder in Pakistan was taking place these last 10 years?

Where were you when all our institutions were being royally raped and destroyed by Zardari and Nawaz from 2008?

Where were you when cronies and toadies were appointed to powerful posts so they could loot and plunder with abandon?

Why on earth would you support criminals like Nawaz Sharif and Asif Zardari?

Why for God's sake? What have they given us, except deprivation, destruction, corruption, loot and plunder and large projects to fill their own pockets?

You are either ignorant, misinformed, or have deep political, social and economic vested interests with the current mafia like status quo.

And many amongst you with full stomachs, wealth, power and access to state power are not directly affected, so far by this massive institutional destruction and plunder of our wealth.

Woe the day when the pain and the cries of the anguished and underprivileged burst out on the streets!

They will douse your lights, loot and plunder your wealth, burn your houses and end your lives!

Woe that day which is not far off, if this system continues.

Many of you, like me living overseas, in safe environments, are completely oblivious to the horrors, our poor and exploited face everyday.

You the rich and powerful and privilged, are untouched and unfazed by the cries and agony of the millions who suffer everyday.

You do not hear the cries and death throes of the hungry, undernourished malnutritioned poor child, man and woman.

The only cries you hear are of two convicts. The criminal Nawaz and the forgerer Maryam!

You do not suffer the agonies nor do you hear the cries of the millions of suffering sick as your sickness is attended to by the expensive private hospitals in Pakistan!

Or like Nawaz, Shahbaz, Kulsoom, Zardari, Asim Hussain and others like you, who fly off to hospitals in Europe and North America to save your blighted health!

Your ignorance of what's happening, deliberate or unconscious, is a curse on your insensitive skins, your conscience and your souls.

Your ignorance and insensitivity is a far greater curse than the curse of ignorance which millions of our youth are blighted with. Our schools and colleges failing them, providing an education which offers them nothing. No skills. No competencies. No employment!

Your ignorance pervades because you do not face the fascism of our police and others, either buying your way out or using your influence.

You are a miserable, sick, prostituted lot.
Prostituted by your arrogance, your power, your wealth, your egos, your privileged lifestyle, your vested interests and above all your insensitivity and ignorance!

So since you've sold your souls, your self respect, your honour and your dignity, you will do everything in your power to bring down the man and the institutions, who for once in a long long time, in a rare moment in our blighted God Forsaken history, are desperately trying to fix our corrupted body politic and fight for the under dog, the poor, the marginalized and the socially and economically disadvantaged.

You want to kill this rare moment in our history!

If God Forbid, we are unsuccessful now in changing our system then please remember it was you who stabbed Pakistan in the back!

And then cry not when the flames engulf us all!

But there is still time to redeem yourself.

Please Vote for Pakistan specifically Imran and not this terrible band of looters and plunderers of the Sharifs and the Zardaris!