The Real Test of Khan - Insaf Blog by Yasir Awan

The Real Test of Khan - Insaf Blog by Yasir Awan 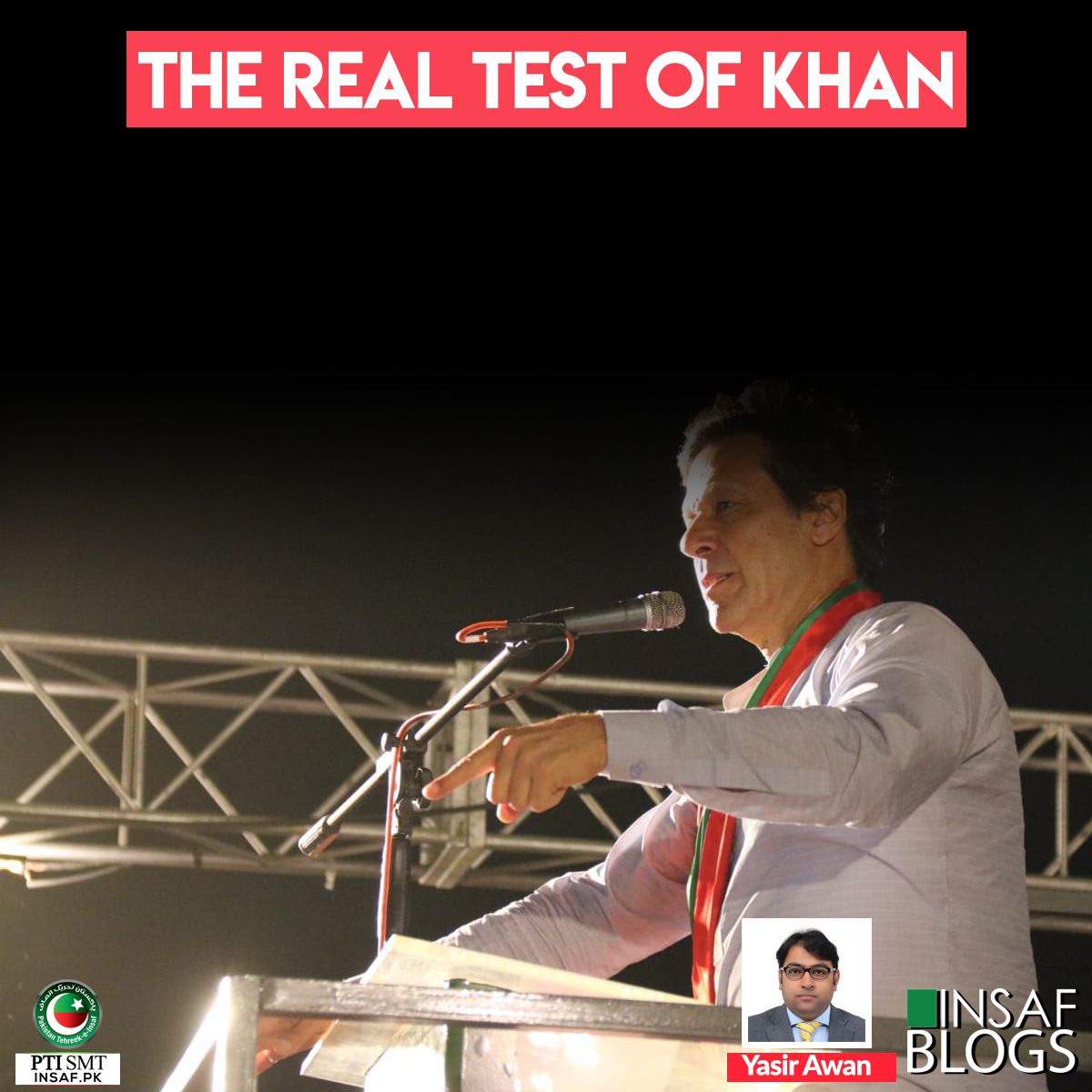 By the Grace of ALLAH ALMIGHTY, our upcoming PRIME MINISTER is IMRAN KHAN. 22 years of day and night struggle eventually paid off. From the tonga party to Pakistan’s largest political party, a dream coming true of NAYA PAKISTAN. Khan said he came into politics because he believed that the potential of our beloved country Pakistan was never being realized. He further added the Pakistan which he saw growing

up deteriorated in front of his very own eyes; he wanted Pakistan to become the country which our Great Leader Quaid e Azam visualized and envisioned to be the best prosperous country of the world. Elections 2018 were historic in nature. The party which boycotted elections in 2008 and survived with 30+ seats in 2013 is now going to rule Pakistan in 2018. What a tremendous journey of highs and lows for PTI and its members. Now this thrice married playboy, who used to hang out with Mick Jagger, but also an Islamist who had been getting advice from spiritual clerics. 65 year old Khan attacked feminism, disparaged liberals, embraced die hard radical religious factions and who vows to uphold Blasphemy

law. He even enjoys the support and consideration of Pakistan’s most strong military establishment, but termed as stubborn and is famous for going his own way. Khan, the next sworn in Prime Minister of Pakistan, said “we are going to run Pakistan in a way it’s never been run before”. These are the words of Khan in his opening speech. Khan said he wants our society to be just like the welfare state along the lines of what the Prophet Muhammad (PBUH) did 1400 century ago. A state which is plagued by extremism and radical elements, corruption at the highest levels,country fighting against poverty, poor health conditions, economic stagnation and instability of direct investments. He said I would be feeling embarrassment if I take oath and shift to PM house. In country, where thousands of people living below poverty line, he would be embarrassed to stay in such a house. He further added there would be no political victimization; the rule of law will apply equally to my workers and those who are not. “Accountability will begin with me, our Ministers and then it willtrickle down.” Now the BIG question is what’s next in line for PM Khan, what would be the priorities of the incoming

government? What would be the AGENDA?? There is a long list of problems which are to be addressed.In my point of view, following are the core issues at present which our beloved Pakistan is facing and theincoming government will also face.1.) Energy 2.) Health 3.) Economy 4.) Education 5.) Security and Foreign Policy 6.) Water and Environment 7.) Gender 8.) Media and Culture Energy, the first and the most important problem faced by Pakistan. This sector needs sound solutions to end the energy crisis and woes. Rural areas are the most hit areas facing frequent power outages. These load shedding’s have financially drain our fuel import pockets. The beast of electricity demand is

getting bigger and bigger day by day, fluctuating and changing across the different seasons. The new government has to deliver electricity at most affordable price. Mini Grid concept should be introduced

at grass root levels to deliver reliable, uninterrupted electricity to consumers. The capital financing of the mini gird can be monitored strictly to buy power for the community. Banks will prefer to buy mega projects in order to get the maximum profit in terms of interest they earn on the loans they will float to the new government. The same logic will apply to foreign donors. Bureaucratic system would have to be revamp in order to avoid hindrances they put across the flow of the projects. The solution to electricity gap is available; the new government should opt for the best cheaper options for beneficial and sustainable energy. Next comes in Health sector, PTI has claimed that they have done marvelous work in this sector. Health is the most important key factor and concern of many people in Pakistan. Health policy needs and serves as brain of complex system of medical institutions, universities and doctors. Without brain body cannot perform, same case is with this sector in Pakistan, it’s having been deprived of brain since ages. After 18th Amendment of the constitution, health is no more federal government subject. The provinces arenow getting the funds from federal government and they are making their own policies which suit them. Now the present government will have to cater health related policies keeping in demand and supply of the respective province. Kidney centers, Heart centers and trauma centers would be on the hit list, the government will have to ensure handing over the funds for the projects and its usage wisely without waste and delays. The differences between the public and private sector would have to be sorted out. The due credit will have to acknowledge of both the sectors. Last but not the least; the incoming government will have to put reins on pharmaceutical companies, the prices should be brought under control.Economy, the incoming government is inherited with sharply depleting foreign exchange reserves. The first work of the PTI government should be arranging the inflow of foreign direct investments. Rely on IMF funds will have to be minimized; the arrangements with IMF will have to tabled looking at the current fiscal year 2018. The oil prices will have to be brought back to its base, the artificial inflation in the prices of oil will have to address. The taxes have to be increased and the expenditures will have tobe reduced. Circular debt problem will be another headache to the incoming government.

Foreign borrowing, domestic taxes, power and fuel prices need dire reforms. The government will have to formulate an economic policy which has to be different from the previous ones. Education crisis are looming over the head of Pakistan since its inception. There are millions of children’s who have not seen the gate of the schools. Allocation of the funds to this sector from the budget is the root cause of every problem. Policy should be charted in order to decrease the gulf between private and public schools. Creation and implementation of systems which will measure and report the state of education in all four provinces. Rapid upgradation of the schools and aggressive investment on

programs to develop math’s and science skills as Pakistan is going to participate in TIMSS (Trends in International Math’s and Science Study) in 2019. I believe the new government has the ability to

overcome all these crises Next big issue is the foreign policy. Pakistan has been running without a foreign minister for couple of years. At present Pakistan is facing security concerns, like we are in the Grey list of FATF, global and regional terrorism and violent extremism. Inter-state relations and then the proxy war faced by our military. China emerging as super power being declared as dangerous by United States and its allies.

Diplomatic relations have to restored and new policies will have to be drafted in order to regain theconfidence of the countries after the war of terrorism which Pakistan faced. The balance of civil-military relation has to be brought up. Religious factors and the sanctions looming over the head of Pakistan due to these factions have to be catered wisely. Ops Raddul Fasad will have to continue for the proper peace and prosperity within the region. Border tensions and neighborhood challenges have to be met by formulating new tactical foreign policy. I believe the new government in making can help Pakistan regain its dynamic and strategical position without getting Pakistan instable and polarized in the region.

Water is the next biggest crisis Pakistan is facing now. We need a policy to address water challenge in Pakistan. National Water Policy and its implementation is the need of the time. We need more dams tobe built in. The federal and the provinces have to formulate the usage and the allocation of the budget resources according to the needs of the respective areas. Around 60 % of the water is wasted each year due to ill systems and incoordination between the provinces. Formal coordination mechanism is to be aligned or have to be made in place. Subsidies in each province have to be revised in order to minimize the losses. The new Government has to work hard to make Pakistan a water secure country These are some main core issues to be addressed after taking oath by PM Imran Khan. Now let’s see how PM Khan walks the talks. His actions have to be louder than is words.