Punjab on the brink of Catastrophe - By Fawad Chaudhry 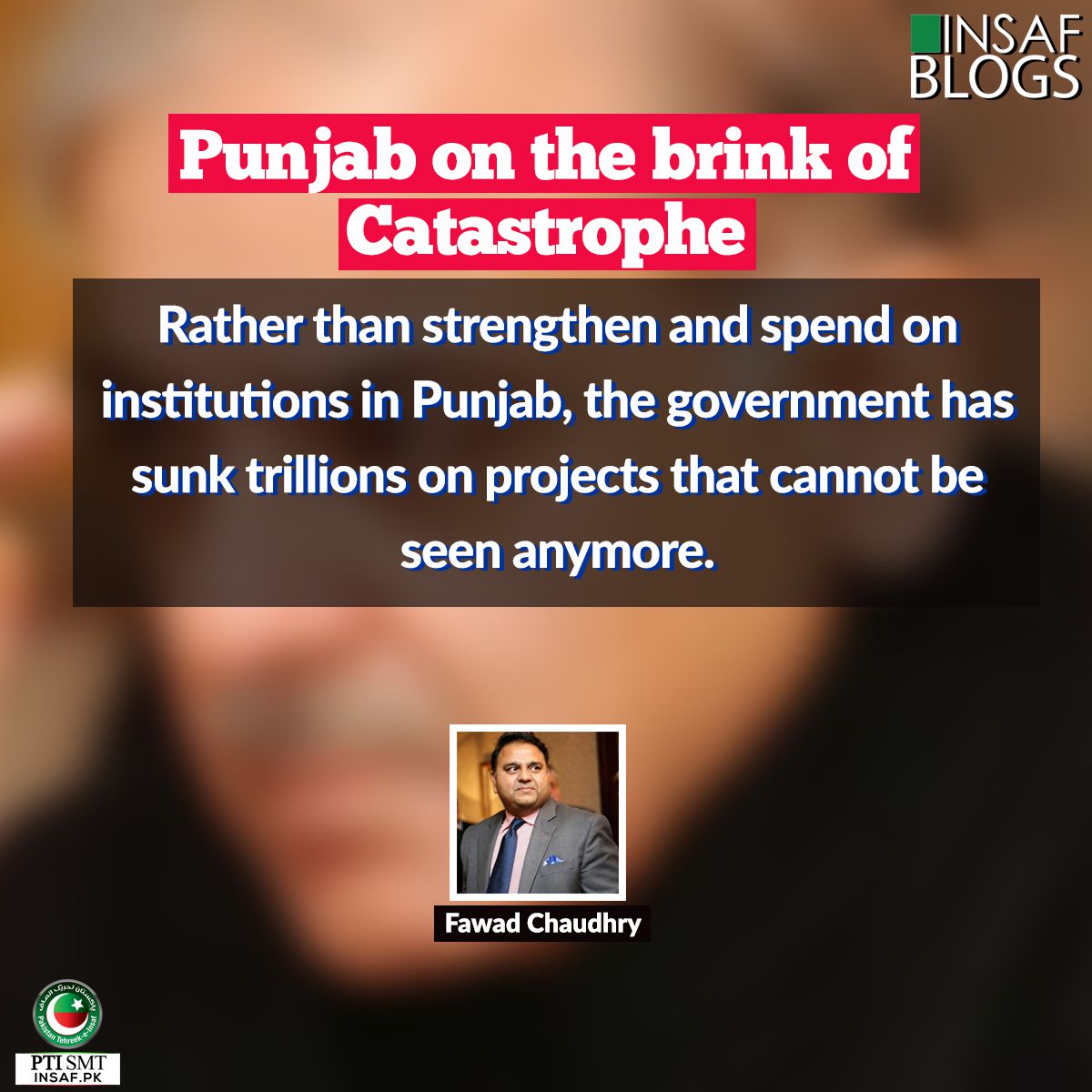 Punjab a province known for its lush green landscape, it's flourishing fields full of harvest yield and it's ability to be the breakfast basket of the entire nation. A land which was known for its rich culture, art, a hub of education and the ability to sync in people from all ethnicities of Pakistan is on the brink of catastrophe.

Although the story has gotten old by now, unfortunately it has yet to show signs of changing. The truth is that the only visible change to this story is that it is getting more tragic by the day.

Summer is upon us and with the ever-increasing heat, we have ourselves another budget session. The federal government has already presented us with how it plans to inflict more misery on the masses. Perhaps this is how the PML-N chooses to say goodbye.

Having been in power ever since the ouster of General Musharraf, and the reintroduction of democracy in the country in 2008, the outgoing Punjab government has now had control of the province for two consecutive terms, but what does it have to show for all that time spent in control?

This year’s budget is expected to be above a trillion rupees, with the government having spent in excess of 12 trillion rupees during its ten years in power. That is a sum that all other provinces in the country would do most anything to be given.

Where did it all go? Other than the normal running of the province, the Punjab government has sadly sunk that incredible sum – we are talking about around $10 billion – into one scheme after another that has failed to deliver any prosperity to the masses and has instead lined the pockets of those at the helm.

It started with the Sasti Roti scheme. Does anyone even remember that one anymore? It was scrapped soon after it had started, but in that time, 32 billion rupees were effectively wasted, for which the province has now absolutely nothing to show. It is anyone’s guess how much of those billions are now safely tucked away in bank accounts.

Sticking to his obsession with projects that would look good with his face on them, Shahbaz Sharif sold us the dream that was Danish schools; more of a nightmare in waiting really. Billions sunk into a programme that was completely unnecessary. The simpler and more efficient move would have been to reform and improve the existing education infrastructure in the province, but that would not have made for catchy billboards. No one knows what became of those schools – not even the chief minister, it would seem.

Next in line was the laptop scheme. Again, instead of improving the IT labs in public schools, colleges and universities, the younger Sharif brother made the most naked attempt to try and buy the youth vote, inevitably a failed attempt. No sooner did the first batch of laptops get distributed that the first news broke of immense corruption in the procurement of said laptops.

The most recent scheme favoured by the chief minister of Punjab in which he opted to squander billions was the Ashiana scheme. The same scheme in which a certain Ahad Cheema has been implicated in corruption and is currently behind bars pending his case.

The pattern is clear for all to see. Nothing has been done that can be visibly be shown to have made a difference in the province. Whatever little infrastructure work has been done has been limited to the limits of Lahore. For all intents and purposes, in the eyes of Shahbaz Sharif, the rest of the province does not exist.

Around five billion rupees have been spent in Lahore in the last five years, most on roads, and even now if you take out your car and drive on the roads of the provincial capital it’ll age at an accelerated rate, so bad is the condition of the road infrastructure in the city.

The argument remains that rather than strengthen and spend on institutions in Punjab, the government has sunk trillions on projects that cannot be seen anymore. Roads have been built, but nothing has been done to improve the efficiency and capacity of the people that are empowered to enforce traffic laws and ensure smooth flow of traffic on those very roads. From encroachers to law breakers, the roads in the province present the visage of a free for all fiefdom where anything goes so long as you have the means and influence to get away with doing wrong.

These days the Punjab government’s pet project is PITB, an institution that has sunk uncountable sums of money into projects that are nowhere to be seen. The institute has made no progress in actually bringing about an IT revolution in the province. According to a recent UNDP report, 94 out of 100 students in Punjab have no access to a library, but 50 out of those 100 people do have access to cell phones. The most obvious move for the PITB would have been to digitise education and provide means of learning to students through their phones, but Shahbaz Sharif’s pet project of the week would prefer to put out meaningless press releases on MOUs that will inevitably deliver nothing, a recurring theme for the PML-N government. Is it any surprise that corruption alleges have now started making the rounds against PITB?

This outgoing provincial government has become so Lahore-centric that people from all around the province are forced to converge on Lahore for their basic needs, the most prominent of which is healthcare. Over time, more and more people in the rest of the province will be forced to migrate to Lahore for survival, putting more pressure on a province that is on the verge of turning into another Karachi in terms of over population.

Money was never an issue for this provincial government; they always had plenty of it, perhaps too much to be in the hands of such visionless people. Having spent all this money with nothing to show for it, all that has been achieved is the glorification of egos and the betterment of some bank accounts.