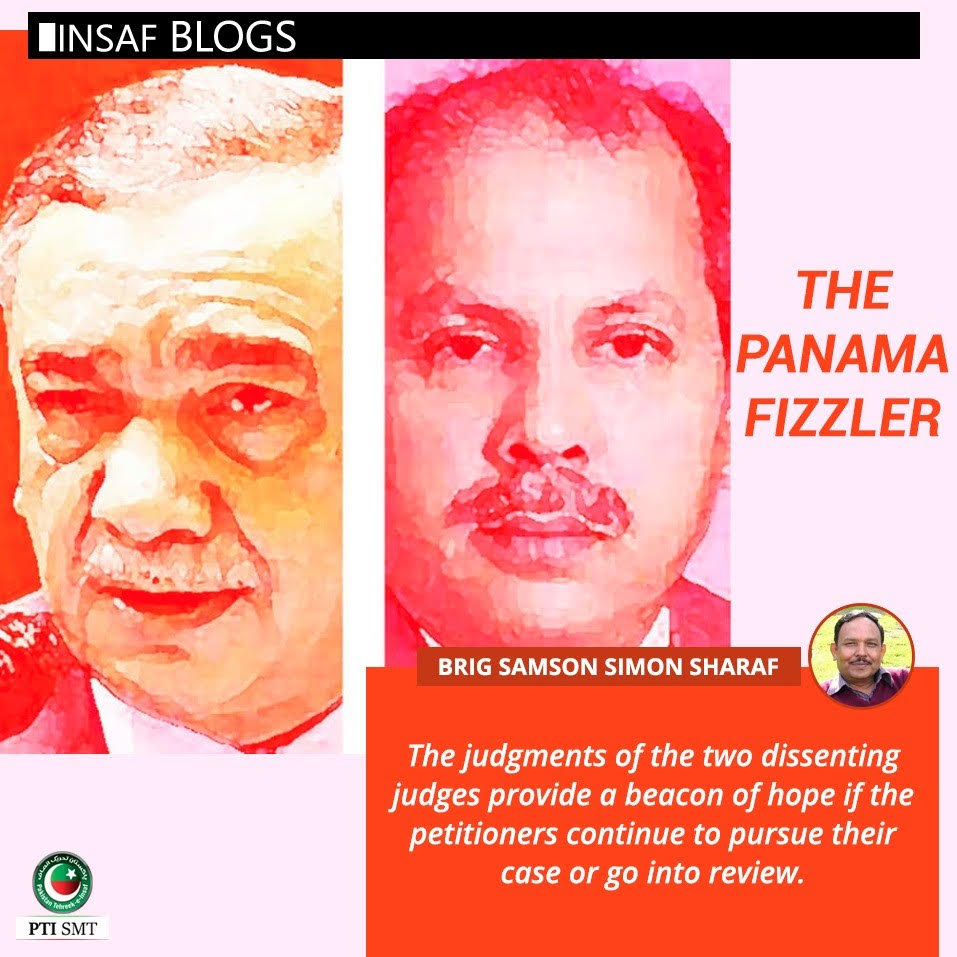 “The secret of a great success for which you are at a loss to account is a crime that has never been found out, because it was properly executed.”- Honoré de Balzac

The introduction to the Panama Bench judgment is sensational and apt. Perhaps the ruling judges allowed the dissenting judges to write this much in their honour. The quote most likely comes from Justice Khosa, known for his taste of good literature. Strangely the majority judgment betrays this tempo. It is contrary; sometimes conforming to questions of law, sometimes to judicial precedence and mostly disregarding both. It has confused the public and emboldened the guilty to pronounce innocence. The future is held by a new judicial team that could drag the proceedings into 2018 or when the present government has completed its tenure. This means denial of judgment. This article is premised on delays and evasion, the new implementation bench and the joint investigation team.

The preamble admits that a crime has been committed and the case property found; the question is how and by whom? The course of the final judgment branches into two split opinions, that contradicts the opening notions attributed to Godfather. Two senior dissenting judges ruled that the facts in the case provide enough evidence on ‘how the crime was executed’ and render the Prime Minister disqualified, while the majority three though admitting ‘the crime and property in case’ want to dig deeper into the mechanics of the ‘properly executed crime’ or in NAO language, ‘the contrary’. This deep digging holds the key to delays and subsequent exoneration.

True to the evasive reputation of delays in Panama case, from the Registrar of the Supreme Court calling the petitions frivolous, to fading away of the Jamali Bench, this divided bench inconclusively palmed off its responsibilities to a Joint Investigation Team and the Chief Justice of Pakistan to form yet another bench to consider the matter of disqualification. By passing the buck to the Honourable Chief Justice ‘to constitute a Special Bench to ensure implementation of this judgment so that the investigation into the allegations may not be left in a blind alley’ three members of the bench, like Pontius Pilate, have washed their hands and resigned the fate to yet another bench that shall start anew to hear arguments and determine the findings of the JIT to pass a judgment.

With the ‘partly declared criminal’ accused continuing to be the Chief Executive, departmental inquiries are least likely to be neutral. If the NAB, SECP, SBP and FIA had not acted then, how could it be assumed they will act now? Model Town is a case in point. With a long reign of governance in Punjab and center, the family has built a cadre of loyalists in every department and autonomous organisations. This is how they had over prolonged periods of time cheated the system and will do in future. The split judgment gives them a lifeline they could use to advantage.

The Panama Bench is a split verdict partly indicting Mian Nawaz Sharif and mostly, affording him an opportunity to absolve himself through a criminal justice investigation system of JIT that is already discredited in Pakistan. JITs are interrogative in nature in which the accused can also make confessional statements before a magistrate. Unlike the past, this JIT is under orders of the Supreme Court Bench. It shall in all probability operate under the Supreme Court and submit its findings accordingly. The terms of reference are still not known but a question immediately arises as to how mid level officials will summon the prime minister or how they would be able to dig into the hidden records of their own organizations to sift details on the ‘execution of the crime’. Will these organisations that let it happen allow anyone to dig deep when they remained inept before the present bench. Will this JIT hold its investigations in the Supreme Court premises? Will the objections of the petitioners to members of JIT be entertained and by whom? Lastly, will the bench allow the petitioners to raise inquisitorial questions?

My article in Nation titled ‘Panama and Afterlife’ published on April 8, 2017, provides an insight to why such a half cooked judgment came to pass: “Most legal experts feel that once the ownership of properties in Panama case was determined, it was a matter of days for the Jamali Bench to announce its decision. It did not, and passed the buck. The bench was allowed to lapse. These experts still maintain that the present bench unnecessarily dragged for too long. The focus was never on issues in quest. If past is precedent, the bench is caught in a catch 22. Courts in the past have always exonerated Nawaz Sharif. Had it been PPP, the decision would have come much earlier. Secondly, the bench feels that an affirmative decision could lead to an undetermined period of instability”. Three members of the bench have vindicated these fears. The delay and shirking of responsibility is evident.

The order of three judges to make a JIT is based on a misplaced notion. They abdicated their inquisitorial jurisdiction. In this case there is no need to unearth assets. The case property i.e. assets are already established and never denied by respondents. The order disregards Section 14 (C) and 9 (5) of NAO. This means that the accused or benamidar assets or irrevocable power of attorney in respect of any assets disproportionate to his known sources of income, which he cannot account for or maintains a standard of living beyond that which is commensurate with his sources of income is deemed guilty and the Court shall presume, unless the contrary is proved, that the accused person is guilty of the offence of corruption and corrupt practices and his conviction shall not be invalid by reason only that it is based solely on such a presumption. On this basis, the two dissenting judges have deemed the Prime Minister to be guilty while the three still harbor doubts despite the incriminating preamble. Why are three members of the bench insisting on digging out the ‘contrary’?

The judgments of the two dissenting judges provide a beacon of hope if the petitioners continue to pursue their case or go into review. Their remarks can become a start point for arguments against the respondents particularly when the same find repeated references in the full judgment. The fear is that the new bench will reboot the entire case resulting in delays that suit the respondents. If Justice Saqib Nisar’s Choicest gave a half judgment, what are the others expected to do? In the meantime, the accused will continue to rule the country with abandon and effect investigations.

But one thing is sure. Panama will continue to have an afterlife.