Naya Pakistan, A Hope or an illusion - Insaf Blog 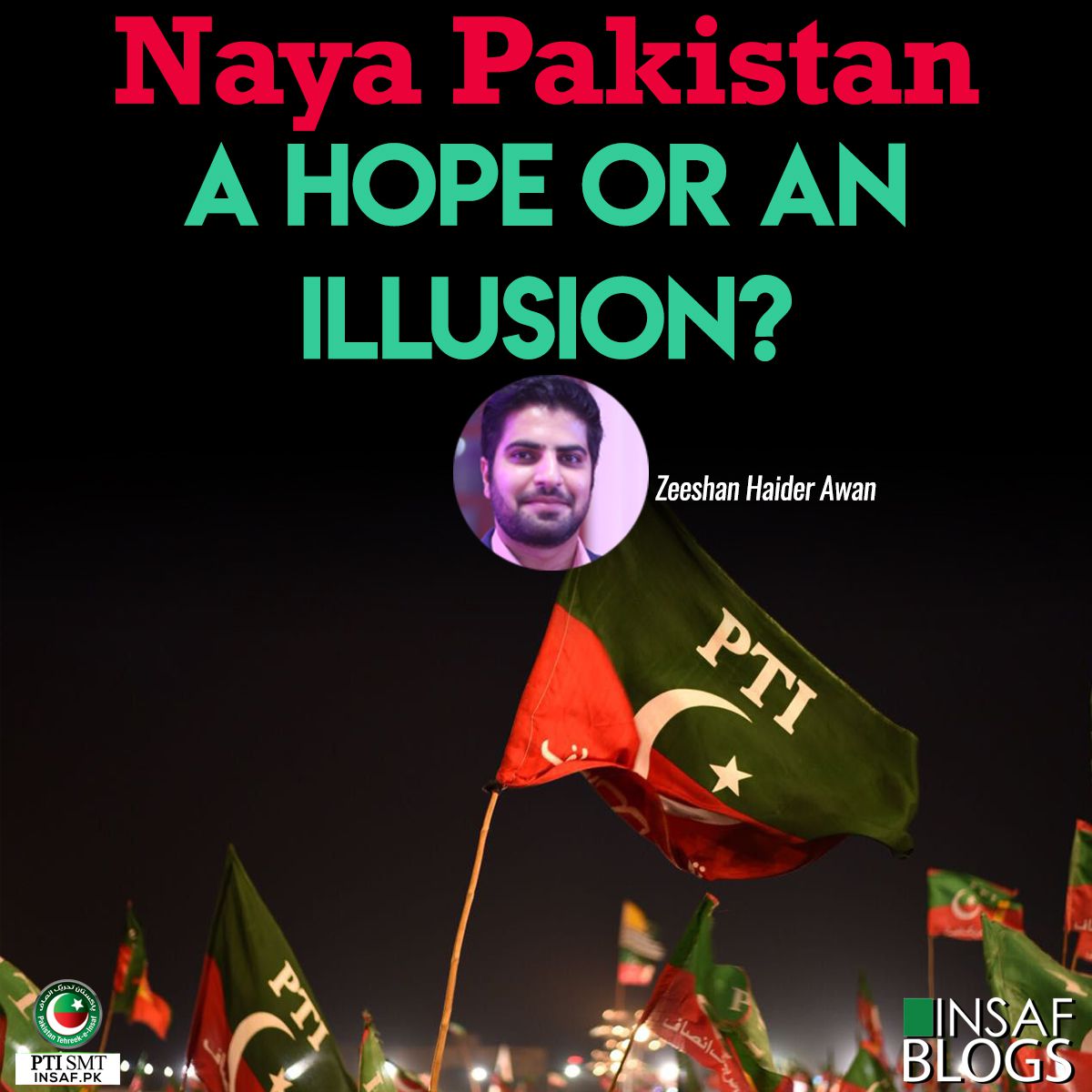 While recalling my teenage memories, I remember it was 6th of September 2008 and while presidential elections were being held in the parliament with Asif Zardari sworn in as the nation’s president, a party with handful of supporters was protesting at D-Chowk, Islamabad against this election. It was this time I formally met Imran Khan who was by then just an iconic figure and a national hero but holding strings of what people called a “Tanga party”.

Tired of being standing in hot weather for an hour or so with police charging on us, we lost our ground however, Imran Khan in deep sweat remained on front foot and I still remember him saying “This is injustice, when we will come in power, we will eradicate dynastic politics”. At that time, I didn’t believe him nor did any of us handful supporters had the projections of threat he posed to the oligarchy of Sharifs, Zardaris and the establishment, though, we knew the strong determination, faith and inner belief he had in himself and us.

For the party supporters and ideological workers, our journey began amidst conflicting rays of belief and incredulity, hope and despair and here we are, 10 years from those days with Imran Khan and the party winning the general elections 2018 and defeating political dynasties out of the arena. After the post government formation scenario, l will quote lines written by Charles Dickens for the French revolution “It was the best of times, it was the worst of times, it was the age of wisdom, it was the age of foolishness, it was the epoch of belief, it was the epoch of incredulity, it was the season of light, it was the season of darkness. We were all going direct to Heaven, we were all going direct the other way”. These lines refer to our current situation too with an identical proportion.

Supporters of the party were initially happy with the government formation but are now feeling diluted with the post elections honeymoon saga.  It is now replaced with bitter reality of situation we are facing which includes but not limited to deep economic stress with GDP falling rapidly, mammoth export deficit, national debts soaring at record 97.8 Billion USD, human development index at critical value of 0.562. On the contrary, public expectations with the government are also high and can’t be met without a magic wand as people are expecting to resolve the 71 years piled issues within the first 100 days.

Imran Khan indeed jolted the Sharif and Bhutto/Zardari dynasties and vowed to take right decisions in his government however, with a simple majority in lower house and only weak position in upper house, the government will and have taken popular decisions let it be the inclusion of MQM and PMLQ in government, on boarding already tested electable on senior government positions. Further to this, implementation of decisions or direction given by the government also needs time, name it the behavior of government officials with public, political involvement of elected representatives in government affairs, the austerity drives including the VIP protocols that are yet to be ended. Mick Jagger’s song “Old habits die hard” gives fair picture of the depiction where government has set a precedent but people need time to adapt to the “Change”. Though government is moving swiftly in implementing its 100 days agenda however, every move by the government is in limelight with independent media and opposition in its pursuit.

Public needs to understand Rome wasn’t built in a day and while Imran Khan should have refrained from high-pitched political slogans, yet its only Imran Khan who has the capability and strength to achieve the impossible with his integrity, determination and wisdom which coupled with way forward strategies and doable objectives will indeed covert the myth of Naya Pakistan to reality. He has proved to be an excellent philanthropist and public needs to give him space for proving his statesman skills. Those who have known Imran Khan understand that despite all the comfort and fame he enjoyed, he has jumped in the dirty political pool and as Leonard Mosley stated the creation of Pakistan as “one-man achievement”, its high time we wait and see when our “One Man” gives this nation the direction it has long been deprived of. Nation has to stay patient, hopeful and keep faith that we can achieve the aim of “Naya Pakistan” which we have long dreamed for.