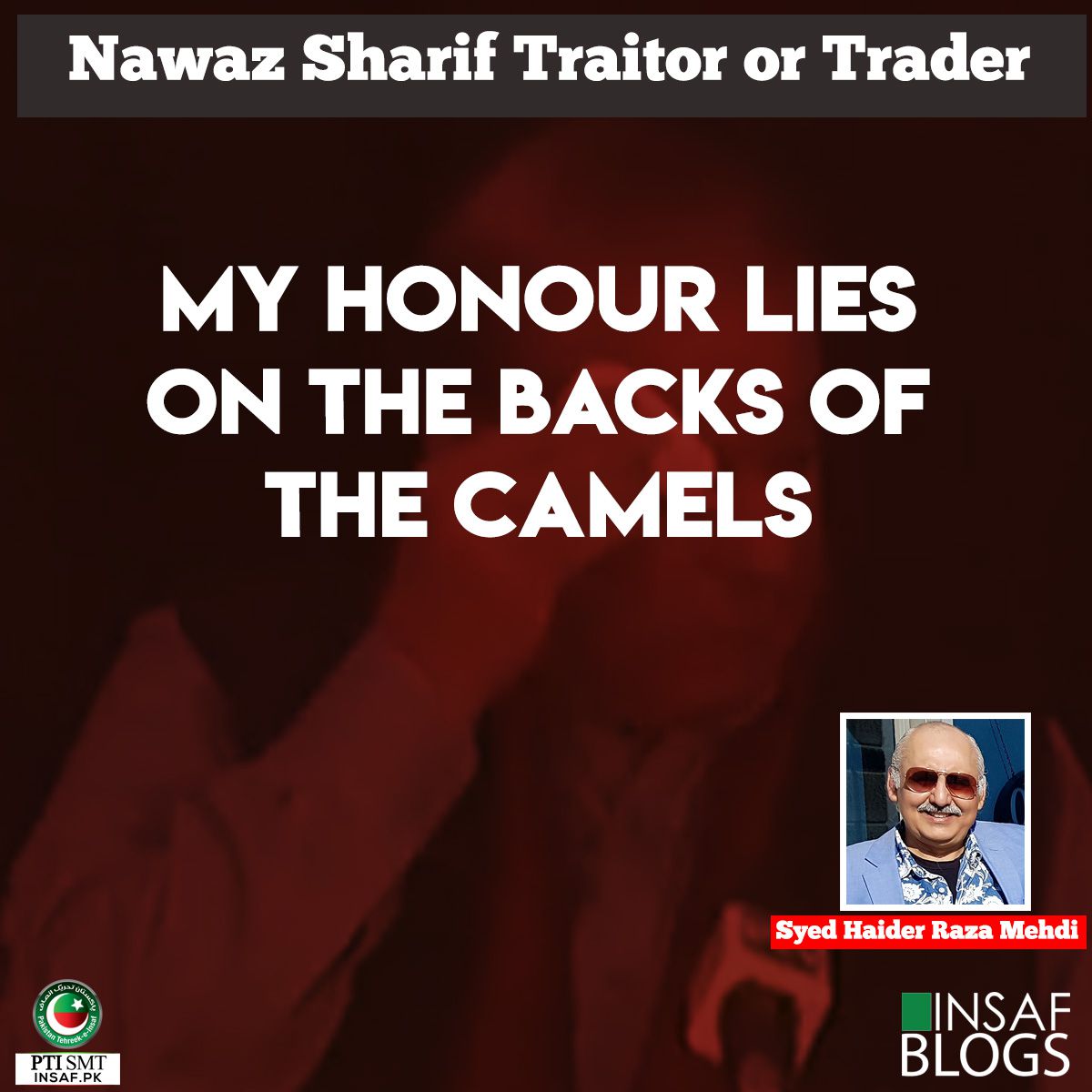 There's a famous dialogue attributed to Abu Sufyan in the movie "The Message" where he refuses to re-attack the Muslim forces who had defeated the Meccan hordes at Oudh. One person asks him..."What about your honour Abu Sufyan....?"

Abu Sufyan responds, pointing to the loads of merchandise on the camels
*" .....My honour lies on the backs of the camels....".

While the movie perhaps fictionalizes the account but what it shows, even from our own Islamic history is how wealth and its singleminded pursuit can overwhelm the entire being of a trader or a business person.

Abu Sufyan and the merchants of Mecca, whose leader he was, were not as much concerned about the new Message brought by our beloved Prophet PBUH, but were more concerned about the loss of business and income due to homage people paid to the many dieties and the associated power with influence, if people bought into the Prophet's Message of Islam!

Such is the power of wealth!
These Meccan merchants were soon able to regain and grab power immediately after the four Rightly Guided Caliphs.

They then transformed this great Spiritual, Social and Economic revolution into an authoritarian, autocratic, imperial, monarchist version of Islam, vestiges of which we still see in Saudi Arabia, UAE, Qatar, Bahrain etc.

Kindly do not read any hidden sectarian agenda in this. The objective is to illustrate how quickly the forces of wealth were able to overturn the pristine Prophetic Message, destroy the State of Medina which was subsequently attacked and significant portions burnt, razed to the ground. As was done to the Kaabah, by Abu Sufyan's grandson Yazid ibne Muawiyyah.

This historical battle between the forces/interests of big business, traders, merchants and rights of the weak, the exploited and the disenfranchised has continued since a merchant made their first profit exploiting the weak!

Even though the line between the two frequently overlaps and gets murky, but their main narratives support these agendas.

Big business has its political parties.

For example, Republicans in the USA, Conservatives in UK and Canada and closer to home the PMLN.

Nawaz Sharif represents nothing but the singleminded interests of a selfish dukaandar, an evil merchant and a business person whose only god is wealth. To him anything in the way of his wealth is an enemy. Not every  business person is of course evil.

Thanks  to the "illustrious upbringing" by his "pious father", he learned that there were two ways to business success. Buy them. Bribe them, and if all else fails, fight them.

Nawaz is now in stage 3 of his battle to survive. Fight those who stand in the way of his wealth!

Here its also important to understand the man and his upbringing.

Nawaz was brought up in a house of traders and businesspeople. All he saw or participated in growing up years was the wheeling dealing of his dad, Mian Sharif and his uncles. Daily, he and his brothers witnessed their father bribing and buying his way to business success.  He and Shahbaz were both instruments of this wheeling and dealing, delivering bribes and hush money on behalf of their father.

So one can see how Nawaz has inculcated these terrible values in his own children, Maryam, Hussain and Hassan.

People close to the family describe how Nawaz was never trusted to do these acts alone, because his father didn't think he was comptent or trustworthy enough, so somebody always accompanied Nawaz in these unholy acts. Frequently it was Shahbaz.

Nawaz was the family's "failure".  Considered good for nothing, except chauffeur his father's friends and business associates or senior bureaucrats around in their Mercedes. He wanted to become an actor and was given under the tutelage of Rangeela the actor/comedian. Rangeela had to embarrassingly admit failure. Nawaz loved uniforms so was made an honorary warden with uniform and all.

But everything changed when Gen. Jilani arrived on the scene and the rest is history which most of the Lahories & top army personnel know.

Nawaz's selection and appointment as Punjab Finance Minister by Gen. Jilani is still a great mystery. The version from someone who had worked very closely with Gen. Jilani is unspeakable.

At this day & age, clearly one must question, what was it about this family that Gen. Jilani chose to ignore the many other brilliant business people families in Lahore and Punjab and pick this village idiot?

Clearly it wasn't Nawaz's "brilliance". Nor was it Mian Sharif's wealth. So why?

Clearly someone very close to Nawaz had an inordinate amount of influence on Gen. Jilani to make him agree to this choice. And this I will leave at that!

Till Mian Sharif was alive, everything that Nawaz did was under his instructions.  As Finance Minister. As Chief Minister and as Prime Minister.  Everything. Government appointments, postings, transfers. Loans. Money was made with abundance and used in abundance to get and buy political loyalty.

By the time Mian Sharif died, he had created a mafia like organization around Nawaz with the likes of Ishaq Dar etc to ensure continuity of this bribe and buy model.

Fast forward to 2018. Nawaz is disqualified for life. His entire empire and political future in potential ruin. A long jail term likely, alongwith Maryam. A Supreme Court that cannot now be bribed or bought as he did, by buying Saeed uzzaman Siddiqi and an Army that he really has never been able to bribe or buy.

So what are his options?

Fight and attack both these institutions. First the Supreme Court and then the Army.

He has attempted to fully exploit the military's achilles heels, their Martial Laws and some of the catastrophic outcomes of their rule. In the meanwhile, he has gained traction and many willing ears from three segments.

Firstly: Those whose business interests and politics are directly or indirectly inextricably intertwined with his, and fear their death if he goes.

Secondly: A die hard core of supporters, mostly from central punjab, who finally see a rare punjabi as a political leader.

Thirdly: Those who have an almost pathological aversion and dislike for the Army because of its history of Martial Laws, militarism and authoritarianism. This is a strange group in many ways. They willingly, despite being aware of Nawaz's criminality, support him because in their opinion, he has stood up to the Army. They are the same people supporting the Pashtun Movement, not because of their grievances, but because the PTM roundly abuses the Army. More on them will be discussed in another article.

But in his desperation to save his wealth and survive, I think Nawaz went a bridge too far with the Mumbai attack statement.

Like a true trader he did what he learnt growing up. Buy. Bribe. Fight !

But is he a Traitor? Depends on what definition we apply.

If it means someone who clandestinely and in secret, joins hands with an enemy and works against the interests and well being of their own country, then I will hazard a qualified yes.

I say this because of stories of handing over a document to Jindal which supported India's Kulbushan case in the ICJ. Not condemning India on Kulbashan. Private meetings with Modi and Doval.

If it means someone who openly through his actions and words works against the interests and well being of their own country, then its an unqualified yes.

Nawaz has looted and plundered this country with abandon! He has destroyed all its institutions, except two. He has brought us to the brink of bankruptcy!

We must not pretend to be hypocritically nice and socially or politically correct to say the obvious!

Nawaz Sharif is a traitor to Pakistan! He is no valiant gladiator standing up to the Army! The sooner he's gone, the better for Pakistan!

It is people like him who destroyed the State of Medina!