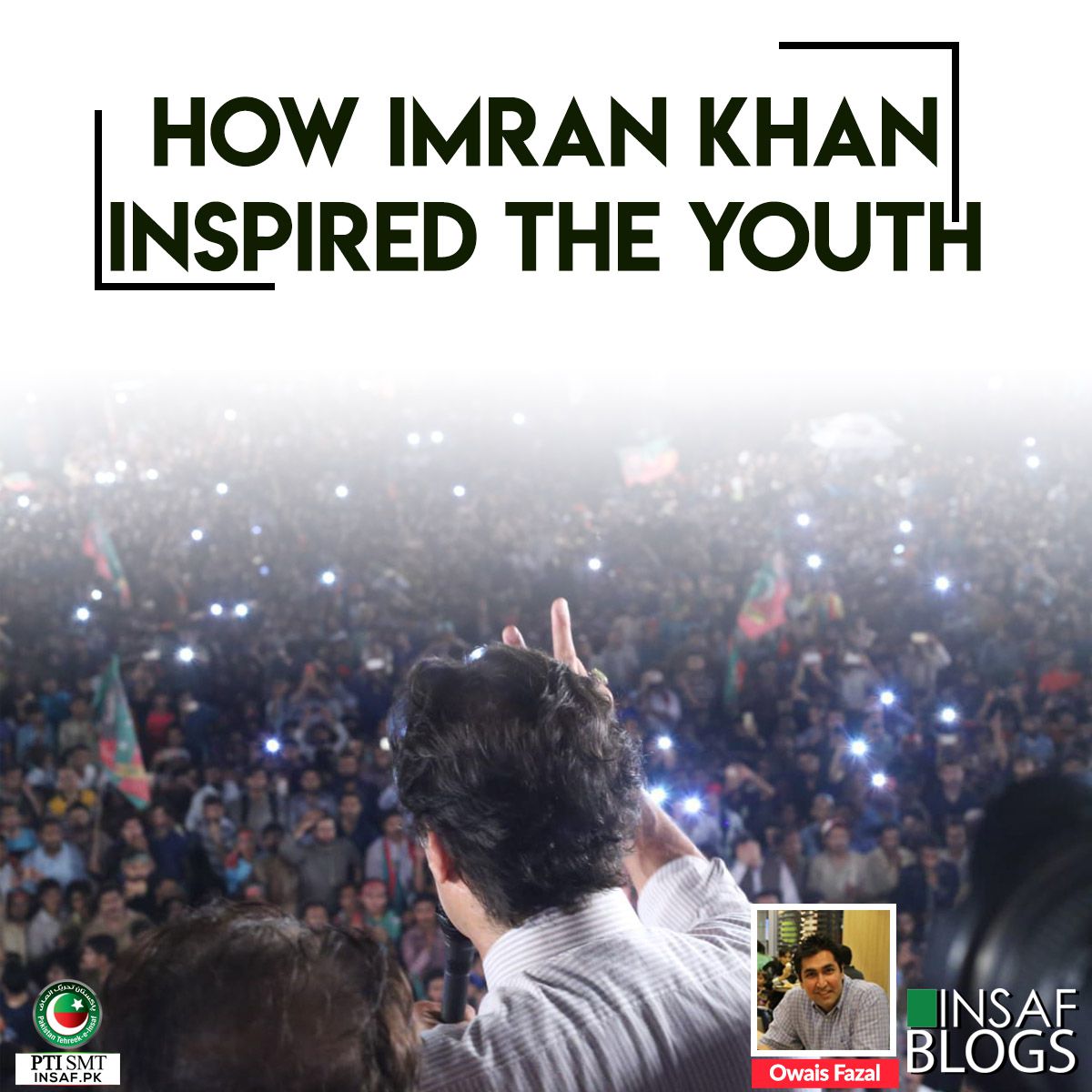 “Great leaders must have two things; a vision of the world that does not yet exist and the ability to communicate that vision clearly.”Simon Sinek

When you read the above quote, it is difficult to dig up examples in Pakistan that relates. We’ve been subjected to hearing lofty claims with distorted visions. But wait there are still few wise men available. And I am going to talk about one of them, Imran Khan.

Hang on, you might think I am going to start his praise for 1992 World Cup, Shaukat Khanum Hospital, Namal College, Pakistan Tehreek-e-Insaf. No, I am going to draw you towards the reason why I am inspired by Imran Khan. Yes I will use some of his above achievements but merely as examples only. But in explaining so I hope to establish that why it’s important to listen to Imran Khan.

So to begin with, how often one finds Imran Khan speaking. Literally every day, addressing a rally, in a news conference, speaking to a guests in a seminar, in a television interview, etc. He is everywhere all the time. I still remember back in 2005, Imran Khan wasn’t the beloved of the media then and made seldom appearances. TV talk shows weren’t that popular back in those days too. But in limited interviews often Imran Khan used to draw my attention. Least interested in politics, I somehow used to listen to him. He used to speak about the same issues that we face every day from corruption, bad governance, foreign policy, terrorism, etc.And the reason to my attention was his objectivity. This is the quality of great speakers everywhere in the world. They are very clear about the subject they are talking about and speak with confident. Here you have a dynamic personality who is upright and talks sense. But in those time, people like me refrained from politics because we didn’t had the same vision he has and also the fact that we weren’t part of the majority that needed to bring the change.

Following these, Imran Khan used to often visit different educational institutes/universities and speak to students. These conversations weren’t always telecasted live. But to this very date, me personally, those are some of the most inspiring and thought provoking conversations I have ever listened to in my life. Here Imran talk less of politics and more about his how he dealt with struggles in life. Like most of the audience, I found these conversations very engaging because as a student I myself needed it for the life I would be embarking soon.Imran used to talk about how the teachings of his parents has guided him in life, how he managed a cultural change when moved to England for pursuing higher education, peer pressure/bullying he received during his early cricketing career, what transformations he had to make in his lifestyle to become the champion, how the sad demise of his mother triggered the idea behind free cancer hospital, what influence Allama Iqbal’s poetry had on him, the political struggles, sacrificed marriage life, painful dissociation from his children, etc etc.

As I (among others) listened to Imran Khan, there was an essential message in everything he shared. We learned about that, nothing can be achieved without hard work and perseverance, how not to get affected by criticism, how to fight overcome the fear that lies within our thoughts, to standup and fight for the right, to motivate yourself after every fall, always dream big, never compromise on your principles, to remain grounded in every success and keep faith in Allah. I remember that he mentioned that whenever he felt depressed, he used visit the Shaukat Khanum Hospital, observe the patients and their misery. In doing so, he forgot his thoughtsbecause their problems were much larger than his. Not exactly same, but I also do something similar whenever I feel low in life and this practice has helped me to rescue my appetite for endeavors. Imran Khan is not a preacher. He never used religion for advocacy of his ideology, but he does reference it, because Allah’s guidance is essential in leading a simple and satisfied life.

Even at that time he didn’t had enough followers to bring him political success. But little did we know that in coming days we will be grow into his biggest advocates.That is what happened following October 2011 rally in Lahore. People finally started recognizing him. As Imran Khan himself quotes Victor Hugo ‘Nothing is more powerful than an idea whose time has come.' This was high time for Imran Khan and Pakistan Tehreek-e-Insaf. The 19 year struggle for justice now got skates to kick-on. Imran Khan and PTI became the subject of discussions. And Imran Khan leveraged the platform of rallies and TV talk shows to spread his message to a wider audience.

From there onwards, I didn’t had to wait to hear from Imran Khan, he was on TV almost every day holding a press conference, addressing a rally or giving an interview. But I would like to highlight few memorable moments from some of his significant speeches.

The first was during the Lahore rally on 23rd March 2013. At the end of the rally, Imran Khan not only made 6 promises himself but also requested the audience to take oath with him. To always speak the truth and to stand for the rights of people among them. This was astonishing. Generally the speeches in rallies are more about addressing on a certain subject. But he requested people to join him and contribute towards a greater goal in life regardless of politics. It reminded me that we all human beings are also responsible in ensuring our responsibilities towards a struggle.

The second memorable moment was from the Lahore rally on 8th September 2017. During his speech, Imran Khan paused and explained how kick-backs when in power. This was one incredible example. In his speech he educated the audience about how financial frauds is carried out by politicians. It was one of his best speeches and opened a broad horizon on corruption.

The 3rd memorable moment was again from the Lahore rally this year on 29th April 2018. On this day, Imran Khan laid out 11 point reforms. He not only specified but also briefly explained each of them. I haven’t heard any other political leader sharing such detailed policies and quoting examples too. This explains how much time and detailed working is being in drafting of these policies before the speech. This was followed up by the 100 days plan in Islamabad on 20th May 2018. Whereas most other political leaders use policy statements merely as slogans with no clear agenda about its implementation.

What I have learned that Imran Khan is an intelligent speaker. He can connect and engage people from all walks of life, young or old, male or female. This is a remarkable skill, something which one desires from its leader. Another distinct quality of Imran Khan is empathy. He often tries to transport the audience towards self-realization and contemplation. One can sense from the way he speaks that about the pain he feels for the people of Pakistan. And he wants us to ponder about it too.

Before Imran Khan, we only used to hear about accountability from various political and military governments. But only Imran Khan pledged the goal and then struggled to set off the accountability process in true means.

The conditions aren’t ideal for the youth in this country. Fewer employment opportunities has made them turn abroad. To not only draw the disconnected youth back and provide them with hope for a future in this country is not an easy task by any means. To me, Imran Khan’s biggest achievement and success is to awaken the consciousness to comprehend and challenge the injustice and corruption.

“Our lives begin to end the day we become silent about the things that matter” said Martin Luther King. In every aspect of our lives from selection of school for our children, to the type of clothes, car or house we buy, to vet the household of groom/bride’s family, in interviewing the correct candidate for jobetcetc, we contemplate hard, seek suggestions, explore avenues, observe behaviors, research, read opinions and exhaust all possibilities that exist, except when we vote. There are people who often choose to abandon their vote because they feel their vote does not count, but they must understand that the countries that we draw examples of democracy, the established societies, the ones we envy to live in have only developed through the power of vote from their people. The ending pages of the economist magazine consists ranking of countries by human development index. The higher the rank of the country the most favorable conditions it has for humans to spend their lives in. Among the top 5 are the Scandinavian countries. During my college days, I happen to read about the democratic system in Norway and I was surprised to learn that in Norway, people additionally also vote on policies. So, no matter who governs, the policy he must follow is determined through vote of the public. Imagine how far their democracy has progressed. Take examples of Muslim countries like Malaysia and Turkey. What were the conditions 30-40 years ago of these countries and how people exercised their right of vote and shaped the future to its current status.

We must be extremely lucky to expect a sincere and just leader through kingdomship/dictatorship. One must read the European history on how they abandoned kingdoms and moved towards democracy. It was a struggling journey and many sacrifices were laid to achieve it. No country was born to be perfect. Think about illegally occupied Kashmiris, they die every day fighting for this right. They dream of a day when they could vote and decide for freedom. Pakistan was not given to us, but the people who chose to create Pakistan voted in favor of the idea to establish their choice. We should be thankful to Allah,Who has blessed us the opportunity to use our wisdom and decide for ourselves.

When we vote, we elect the lawmakers, who make laws, policies and appointments that shape the lives of people in this country not just for today, but for the generations to come. We must be careful in our choices about the person/political party that we are going to opt for. Vision, honesty, capability, justice, equality, experience, boldness, preparation, teamwork, care, empathy and commitment are the things that we always examine when selecting the candidate to vote for.

We must understand that to live life there are only two ways ... one whatever is happening let it happen, keep tolerating it ... or else take the responsibility to change it. And there is no other way to bring change other than to vote.

To my fellow Pakistanis in the end I would only say that listen to Imran Khan, learn from his experiences, come out of your comfort zone, always dream big, rise above traditions and customs. A self-absorbed adaptation of life may suffice for us and our families. But this isn’t what we are made for. We’re here on earth to help others with our abilities. This is the true purpose and meaning of our lives.

As Imran Khan has envisioned his idea of Pakistan in a single statement, “Soon people from abroad will come looking for jobs in Pakistan” and this can only be achieved through unity, faith and discipline.

And remember that change is not an event, it’s a marathon. It’s a beginning of a long journey that must we must jointly tread together on 25th July 2018.

Vote for change, vote for Bat, vote for Imran Khan, vote for not 2 but 1 equal, peaceful and prosperous Pakistan.

I hope to see you at polling station.

The writer is a retail sourcing professional and has educational background in Textiles and Supply chain Management from UK. A gym enthusiast, football fan by passion, an avid and rational political observer. The frequent globetrotter resides from Karachi and he tweets as @Ovais017.