Health Department - One Year and Beyond | Pakistan Tehreek-e-Insaf

Health Department - One Year and Beyond 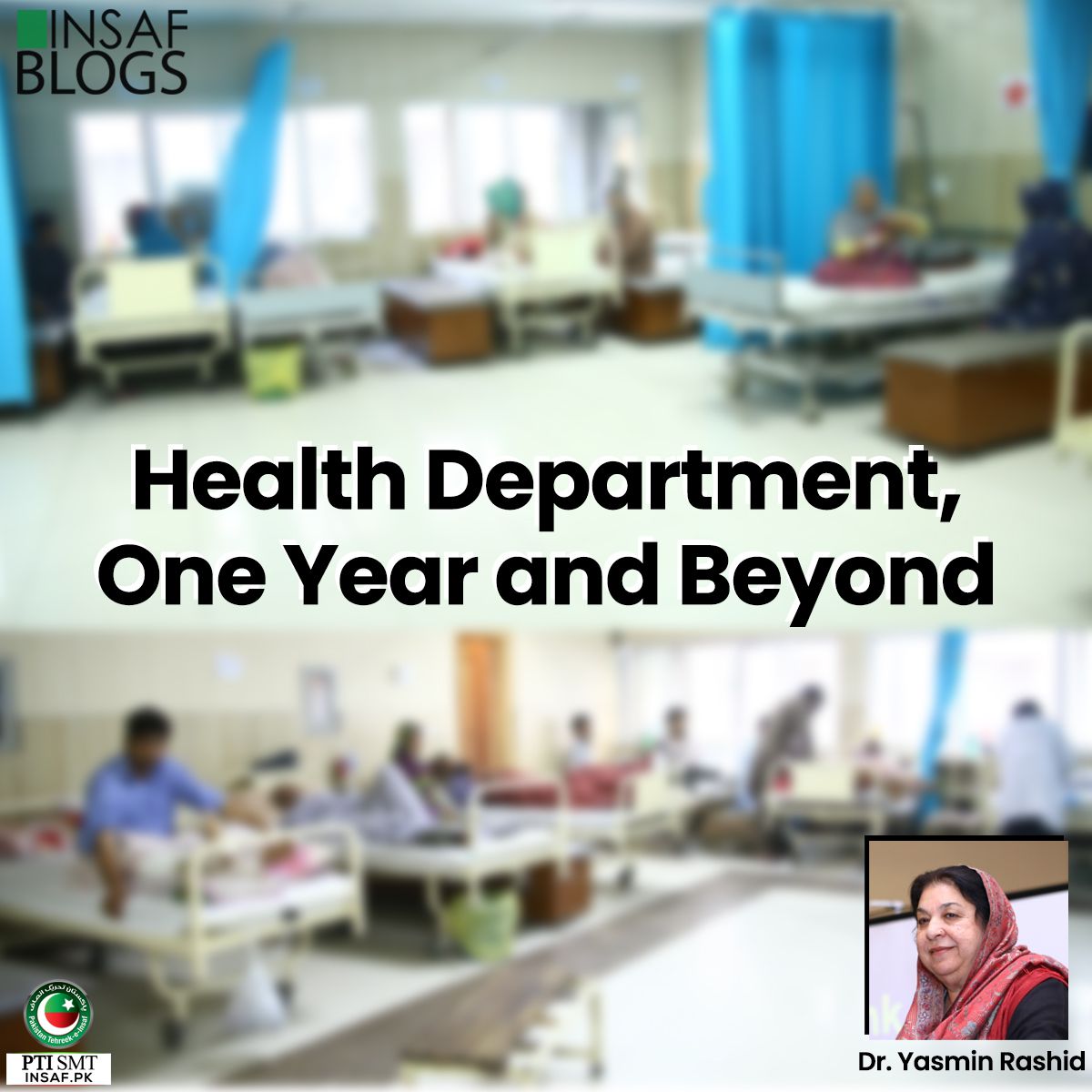 The first year was a year of challenges. It would have been rather smooth had it only been about fixing the administrative jinx. Rather, it turned out to be a multitude of administrative, technical and political conundrums that ‘came not single spies, but in battalions’ throughout the year.

Public offices present difficult choices. There is an easier path and a difficult one. The conventional yet often trodden path is: put inauguration plates, play up things with cosmetics and get into headlines. The second one, a touch lackluster yet the right one is to introduce sustainable reforms in system to make it productive and efficient. The latter comes with a price not to the liking of politicians yet for me it was an instant no brainer. So came extensive consultations with stake holders to identify and address the administrative bottlenecks and devise strategies to improve service delivery.

For a life spent in clinical, academic, research and administrative areas of healthcare, I had already mapped out strategic interventions for improvement albeit the situation was much worse than expected.

So destiny presented this rare opportunity to bring about the change for which I yearned for all my life. The flip side is that the time and resources are scarce; yet this has to be done. Two goals are very clear; equitable and quality health service delivery for rich and the poor alike and development of healthcare facilities and institutions that can take services, research and academics a few notches higher. A few years down the road, court of history will judge how far I succeeded.

In order to create a visible impact in the healthcare service delivery, the pivotal factor is the number and quality of human resource. One shocking realization on assuming office was that the Department was short of around 50% doctors, nurses and paramedics. Only these figures clearly explain the reason for the poor state of affairs. Human resource was an ignored area; even when half-baked attempts were made to fill the vacant positions, red-tapism came in the way; nothing moved altogether.

Hence strengthening of Human Resource became the starting point. In the last one year we have brought 14903 new doctors to the system. Over 10,000 positions of doctors were lying vacant only in the Primary and Secondary Healthcare Department. Not just that, 3543 new nurses have been added to the system and hiring of another 7400 is in process. In different technical and allied health categories, the hiring process of 3537 personnel is almost complete whereas work on hiring of another 1400 has been initiated.

At the 2503 Basic Health Units in Punjab, due to the recruitment of new Medical Officers, it is for the first time that 93% of BHUs have doctors available at the posts. The government has filled over 2200 positions of Consultants at Primary and Secondary Healthcare Department alone. Another major roadblock was the shortage of Anesthetists, as major surgeries depend on them. We have ensured their availability through training programs, new hiring and rotation arrangements. All out efforts are being to complete hiring for new positions by the end of this year.

Promotions were another neglected area requiring immediate attention. The process had hit snags and was a major cause for lack of motivation among the staff. As many as 1673 promotions have been made and the process has been expedited so that unnecessary delays are avoided. Further, we have introduced handsome salary incentives for doctors. An online Facility for Transfers and posting is also being developed which will help remove other bottlenecks.

On assuming office, another painful realization was that Mother and Child Health had remained seriously neglected area particularly in infra structure. We were far behind the Sustainable Development Goals targets thereby necessitating a revision in targets. Quite understandable as mother and child health does not make big news. Therefore due to this dire need, work on setting up of 5 new Mother and Child Hospitals in Mianwali, Layyah, Attock, Rajanpur & Bahawalnagar (south preferred due to data on indicators) on emergency basis was started. A special state-of-the-art 400-bedded Mother and Child Quaternary Hospital is being constructed at Ganga Ram Hospital Lahore. A dedicated Child Health University is also being developed at Children Hospital Lahore.

Our special focus has been on Basic Health Units and Rural Health Centers. Under the Prime Minister Health Initiative, work on new infra structure facilities have started in 8 Districts which are: Attock, Chiniot, DG Khan, Mianwali, Jhang, Kasur, Lodhran and Rajanpur. Under this project revamping of 35 RHCs Emergency Blocks, Establishment of 35 Neo-natal nurseries at RHCs, up gradation of 16 Urban Health Centers and construction of 8 new Warehouse has been initiated. We have upgraded over 300 BHUs to 24/7 model in the last one year. The last government upgraded less than 1000 BHUs in over a decade (an average of less than 100 per year).

The Pakistan Kidney and Liver Institute is another story where Rs 17 billion were gifted to a private entity in sheer violation of rules and regulations. We have brought PKLI under legal umbrella, streamlined its affairs and will make it fully functional in the next few months.

For a country battling poverty, provision of free healthcare to the marginalized especially in emergencies should have been the first priority. The Sehat Insaf Cards are being provided to families with income less than two dollars a day. The services will be gradually scaled up to the population at large. Only in our first year, the health card has been extended to 28 districts to over 3 million families. It will be extended to all 36 districts very soon. The cards provide insurance cover of Rs. 720,000 in empanelled Public and Private Hospitals. Following a similar successful initiative in Khyber Pakhtunkhwa earlier, the last Punjab government mimicked the model in haste. However, neither the hospitals were empanelled nor premium was paid. So even in districts where the card was given, it was merely a piece of paper.

We have undertaken a thorough review of the existing legal arrangements and have introduced PKLI ACT and MTI ACT. Others under process and review are Thalassemia & Other Genetic Disorders Act, Violence against Doctors Protection Bill, Drugs Act, Punjab Healthcare Commission Act, Children University Act and PHF ACT.

We would be reforming the health sector keeping the Sustainable Development Goals in Focus. We are hopeful that by commitment and hard work, we can achieve our goals.