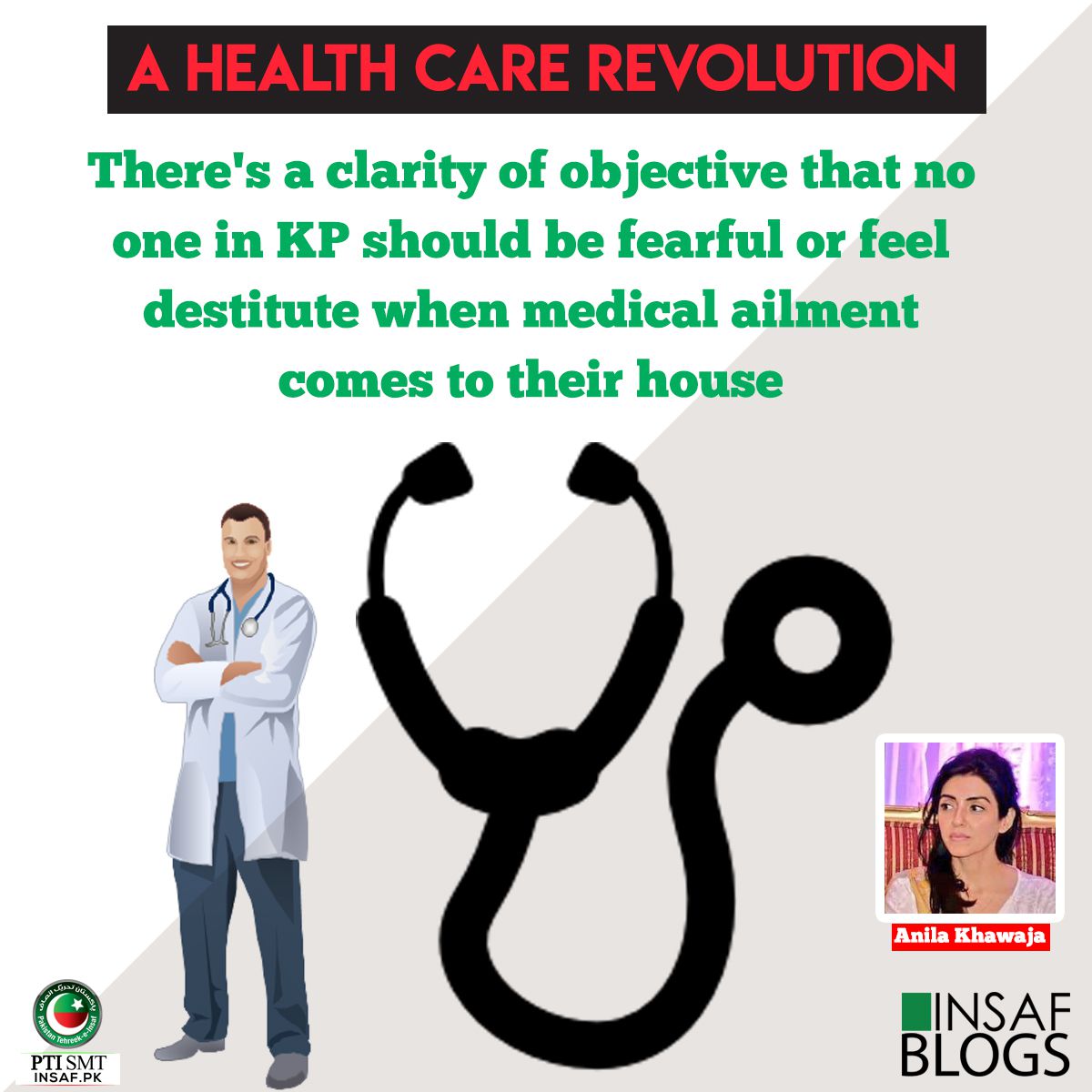 If there’s one institution that more than any other defines a post-colonial, progressive and egalitarianism Britain, it’s the UK National Health Service.
As a beneficiary of it having grown up in England, it is almost impossible to overstate the importance of this service to me personally and my family. This state facility more than any other reinforced the very idea of social contract and why every penny of tax paid to state is justified.  The provision of basic health care irrespective of personal wealth, status, education, or any other differentiating factor fulfilled one of the basic rights of security that every citizen has a fundamental right to expect. Never did anyone of my family or friends have to fear the dire financial consequences of falling ill.
Every penny of tax collected for this service was well worth it, and every government in Britain knows the sentiment of the people towards it.

It may be a long way to go before KP can boast that its healthcare system is as advanced or as comprehensive as UK’s NHS, but it has to be unequivocally stated that the goals of PTI in this area are just as ambitious. The provincial government over the past five years has embarked on the implementation of an affordable healthcare system that has been as transformative for KP as has been the NHS in Britain.

The PTI provincial government has systematically instituted a policy that goes some distance towards providing every citizen in KP essential medical facilities. It has increased the budgetary allocation for health since taking office by almost threefold, from Rs30bn in 2013 to Rs80bm in 2018. In the same period the number of doctors employed has been increased from 3000 to 9000. The number of hospital beds across the province from 12118 to to 18288; and 5070 more to be made soon available. Health insurance that has been provided for 67% of the province residents, with an aim to take this up to 100%.

There’s a clarity of objective, that is no KP resident  need be fearful of having bankruptcy or destitution befall the family as a result of medical  ailment. For the elite few in Pakistan who can easily afford the most expensive treatment here and abroad, the grave  financial ramifications of falling ill may be difficult to comprehend. However for the vast majority the crippling impact on the family should even one member fall ill are sometimes nothing short of catastrophic. It is with this in mind that the KP government with Imran Khan’s blessing put health as one of the top priorities along with education.

The 267% increase in health spending is the highest of any of the four provinces. Not only has money been allocated but the best management with International experience has deployed to ensure that the money is spent in the most cost effective manner such that there’s the greatest return in terms of health welfare for every Rupee spent. Not only have the number of doctors have increased by as much 300%, there’s in place stringent monitoring systems to ensure that there are no ghost doctors employed in the province, as well as rewards or penalties for these medical practitioners is aligned to their performance.

In order to ensure that everyone in the province can take advantage of the system, a basic health-card has been introduced. The premium on this basic insurance scheme is affordability indexed so that those who can’t afford to pay anything are still guaranteed participation in the system. As stated already a large major of the population have health-cards that ensure them access to health facilities. The aim is to have everyone in KP become part of the system. The best international practice for measuring performance of individual hospital departments have been put in place to create an environment of accountability for doctors, nurses and ancillary healthcare workers employed by the province.

No other province has seen as great an improvement in its healthcare system and facilities as KP has over the last 5 years.  Having started from being far behind other provinces, the KP healthcare system can boast to be superior to all other provinces in almost every metric. However the ambitions are not dampened and the goals are much higher than its present achievements. The benchmarks have been set high,  but the direction and pace is such that the PTI government feels confident of achieving these stretching targets.

The rest of the country has much to emulate from the  experience of success in KP, which was assumed to be the most challenging of provinces to institute positive change. Given its  successful experience in KP, Pti is confident that it can deliver similar improvements in other provinces, and someday be able to compete with the NHS of UK.