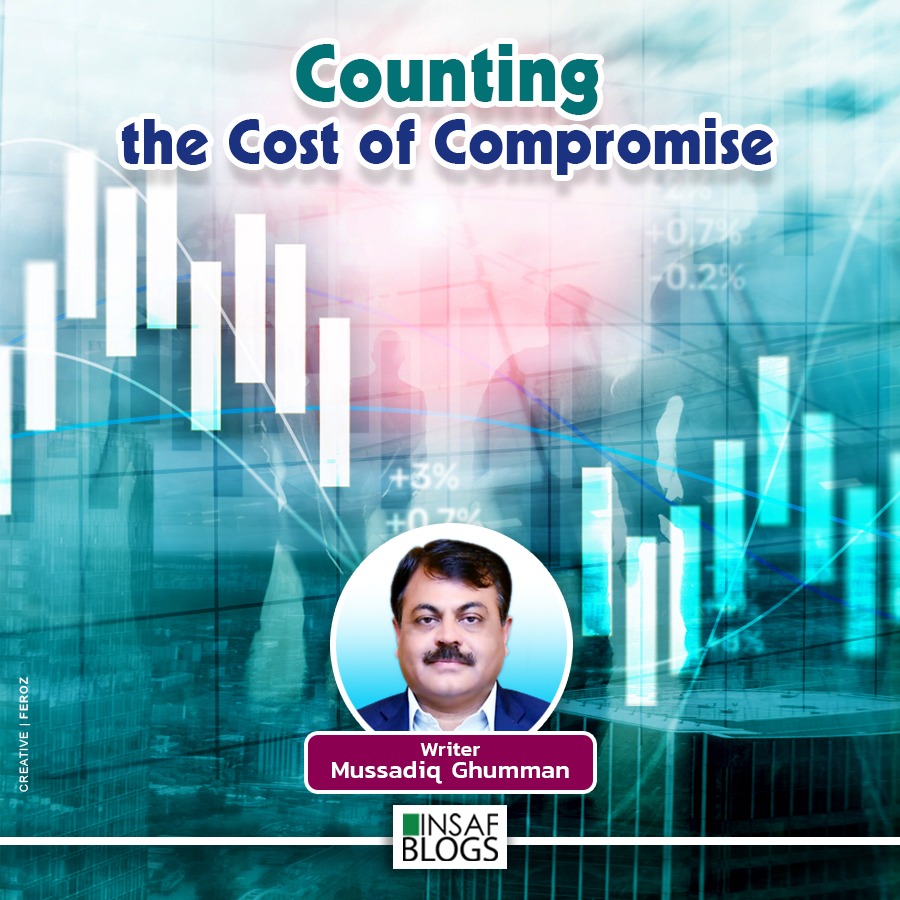 This is a rebuttal to the Column of Mr. Fahad Hussain published in Daily Dawn on 6th March 2021 with title “Counting the cost of compromise". The Columnist targeted and maligned PTI for no reason. He has all the right to express his thoughts but the way he presented his viewpoint can be termed as distortion of the facts. In simple words the column was angled and concocted and can be rightly termed as a depiction of Columnist's selective approach. Reading of the column reminds me a verse that can be a one liner response to the Column.

(I have glasses of my own shop, I see what I want to see)

In short, this column has several inaccuracies and requires a response.

The Columnist discussed five reasons, that he perceives, have "frittered away PTI political, perceptional and populist capital in the last four weeks." This is not true depiction of the current situation because PMLN and PPP are the ultimate losers in the political arena while PTI gained the ground due to its stand on open ballot in the Senate Elections and after Prime Minister Imran Khan's vote of confidence.

My point wise response to the Column is given below:

1. Open Ballot Issue: PTI is a political party therefore like other parties it can also exercise its right of political expediency. This phenomenon always remained relevant throughout the history of mankind and in the history of Pakistan as well.

However, regarding Senate Elections, PTI always advocated for open ballot and never resisted like PPP and PMLN, as both resisted when PTI tried to amend the Constitution in this regard. This was in total contrast to their commitment given in Charter of Democracy. But instead of criticizing them the Columnist tried to find a fault in PTI. His attempt to manipulate and mix up the facts to establish his viewpoint does not match to his stature. In Sadiq Sanjarani case, PPP openly voted in his favor to elect him as Chairman and supported him secretly in motion of no confidence against him. He belongs to Balochistan Awami Party which was created when Asif Ali Zardari led Peoples Party made a covert operation to oust PMLN government.

What is the relevance of PTI in this particular case? PTI always stood with the demand of Open Ballot Senate Elections and while PTI is in power, it sincerely pursued and exercised all available options.

2. Senate Tickets Issue: The Columnist attention to the ticket issue was also PTI centric. Political Parties including PTI should had abided by their respective constitutions while selecting the candidates but blaming only to PTI is not fair. Who is Afghanullah Khan and where has he come from? Has the columnist criticized PMLN on awarding ticket to the son of Mushahidullah Khan? The Columnist also forgot to criticize Election Commission of Pakistan (ECP) which has not fulfilled its constitutional obligations. Elections Act 2017 gives vast powers to ECP to monitor political parties and to bring them under the law. But ECP accepted nominations from political parties without any objection. Had ECP dared to ask any political party to follow the selection process given in their respective constitutions? Had it warned them to reject their nominations if not forwarded after following the due process?

3. Daska Issue: In Daska Elections, again responsibility lies with ECP as this is the primary role of ECP to conduct free, fair and transparent elections. Instead of criticism to ECP the Columnist wrongly put the blame on PTI. ECP Order of re-elections is not fair in all respects and so is its communique which gave space and opportunity to the people like the Columnist to comment unfairly.

4. Hafeez Sheikh Issue: To the Columnist there was nothing wrong with the video of Ali Gilani, the son of Yousaf Raza Gilani, the important thing to him was that PTI could not get any advantage out of it as PTI, as per Columnist impression, had lost its moralistic image on money factor (due to Abdul Qadir ticket and support) and transparency (due to Daska Elections). This shows how biased and selective is our Columnist in his approach. In fact both PPP and PMLN exposed once again in Senate Elections. They are not successful in getting any political advantage by Gillani victory, in fact they lost. They could not even celebrate their victory as the brave move of

Khan's vote of confidence check mated them and now the Khan is on victory stand and PTI supporters are fully charged.

5. Election Commission issue:  PTI did every effort to hold open Senate Elections but this was unfairly discussed by the Columnist. PTI tried to amend the constitution by moving a bill in the Parliament, it issued an Ordinance and it moved the Supreme Court through Presidential Reference, what more could be done? All that were to ensure open ballot to avoid horse trading but this did not appeal to the Columnist. Instead he termed all these efforts as PTI defeat. Can this approach be justified? There was nothing wrong with PTI. It is wrong with the political parties like PPP, PMLN and JUIF which did not play their positive role to purify the system, ECP which has not bothered to act as per the judgment of the honorable Supreme Court and of course it is wrong with the Columnist, who opted for such an approach that compelled him to angle the facts as per his requirements and wish.